TECHNOLOGY: Partnership with The VOID Displayed Potential of Metaverse

As you stand in a dark clearing, suddenly the sun begins to rise. As you gesture your hands over the clearing, plants and trees magically sprout up from the ground around you until a forest surrounds you and butterflies flutter by as a breeze blows your hair and sun warms your back.
This dream-like experience was no dream or fiction in a film. It was a virtual reality (VR) experience created by hyper-reality experiential entertainment creator The Void and was powered by San Diego-based wireless technology innovators XCOM Labs at this year’s AWE USA conference in Santa Clara, held early this month.

“The Void is a powerful experience that completely immerses people in an extremely lifelike virtual world. To ensure that nothing interferes with the user’s experience, it deserves to be experienced with the highest throughput, lowest latency wireless system possible,” said Paul Jacobs, CEO of XCOM Labs. “Enabling creators like The Void is a big reason why we keep inventing at XCOM Labs.”

Improving VR Wireless
The Void experience at AWE showcased XCOM Labs’ multi-user wireless VR system that delivers cinematic-quality virtual reality with near-zero latency, which allows users to move their heads around and experience the virtual world with almost no delay.
“We hear a lot from people that they don’t want to use virtual reality because [the delay] makes them sick and this one doesn’t make you sick,” Jacobs said. “You feel the difference. Your brain really notices those things even if you aren’t conscious of them.”
In addition to solving for latency, XCOM’s wireless technology allowed for other improvements to The Void experience.
“In previous incarnations of The Void, you had to carry around 22 pounds of equipment on your back and it was sort of video game quality,” Jacobs said. “This one was totally photo-realistic and rendered on servers off the user and connected to the user using our wireless system.”
XCOM Labs’ wireless and multimedia technologies enable high performance applications and use cases in both 5G licensed and unlicensed spectrums. The extended reality experiences demonstrated at AWE used millimeter wave spectrum in the globally available 60GHz unlicensed band.
Part of XCOM’s innovation is creating reliability in high frequency wireless, which is subject to its waves being blocked and decaying over distances, by creating a system of nodes controlled by a central processor that allows the high-capacity system to transmit and receive hundreds of megabits per second per user.

“We’re excited to be working with XCOM Labs and welcoming the world to the future of location-based entertainment,” said The Void CEO Adrian Steckel. “The Void needs a seamless, highly reliable wireless VR system to support our data-intensive, lifelike visual simulations and real-time sensory responses. XCOM Labs delivers that.”

Beyond Entertainment
In addition to its VR display with The Void, XCOM also showcased several augmented reality (AR) experiences at AWE, including a dance hall, a baseball game and a helicopter where people could see through the glasses but also see the cockpit controls imposed on the lenses.
Beyond entertainment, Jacobs envisions XCOM’s wireless technology enabling a wide variety of use cases and applications.
“One of the things I’m excited about is putting [virtual reality] in a school gym and let kids go on field trips without leaving the school. They can go to the Great Wall of China or see the Taj Mahal. You can really do some cool stuff with that much space,” he said.
XCOM also tested a potential medical application with UC San Diego students. Using a mix of VR and AR, the students mocked a surgeon at a hospital instructing a novice surgeon in the field how to operate on a wounded soldier in a battlefield. The novice received instructions through AR glasses while the surgeon viewed the patient and the novice’s work on a VR headset.
Other applications XCOM is exploring include remotely instructing maintenance on expensive equipment like jet planes and real estate applications like guiding repairs in buildings on hard-to-find infrastructure like pipes or wiring.
“We’re focused as a company on private networks for enterprises,” Jacobs said, adding that the XCOM wireless platform is built to be able to layer applications on top of it.

Growth and Opportunity
Jacobs – former CEO of Qualcomm Technologies, Inc. and son of Qualcomm founder Irwin Jacobs – founded XCOM Labs in 2018 with fellow Qualcomm alums Matt Grob who serves as XCOM’s CTO, and Derek Aberle, XCOM executive vice chair.
The trio created XCOM Labs to keep working on a technology they didn’t think would get a lot of attention at Qualcomm, so they left to develop it on their own, Jacobs said.
In the four years since, XCOM has raised over $70 million and is currently in the midst of another fundraising round with notable investors like TDK Ventures already announcing investment in the company. 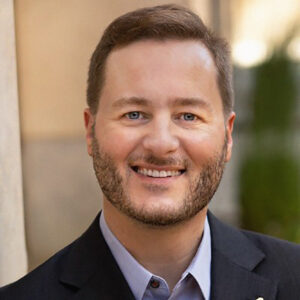 “XCOM technology represents more than just an improvement in capability, but a new potential for how we work, connect and experience life,” TDK Ventures President Nicolas Sauvage said.
“Their solutions are being designed to be pervasive to our digitally transforming world and represent a future that TDK wants to see and is committed to bringing to fruition.”
Jacobs said growth potential for XCOM and its investors is being driven by a variety of factors, including new rules governing the frequency spectrum and a changing climate around international trade.
“Right now in the wireless infrastructure space, it’s been a kind of red ocean for a long time because of competition, in particular Huawei which was grinding out competitors but now because of geopolitics they aren’t able to compete in a number of areas. They left an opening,” he said.
And although XCOM’s wireless innovations can apply to many devices, the company chose AR and VR tech to drive the design specs for its wireless platform – just in time for the metaverse to become a “huge thing.”
“This has all come together to create a good time to be able to bring out a new infrastructure company based on innovation wireless technology,” Jacobs said. “I feel we’re at the right place at the right time. We have tailwinds, so that’s good.”