Poseidon AmphibWorks Launches to Bring EVs to Land and Sea 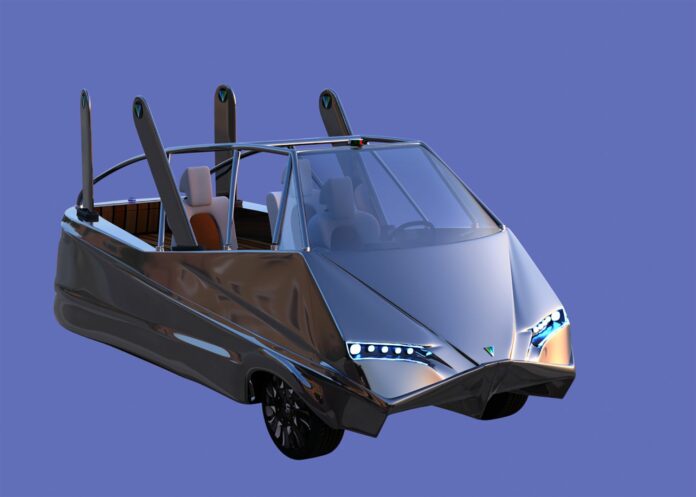 Posiedon AmphibWorks co-founder Andy Langesfeld is an expert in watercraft. He has been a tournament level driver for watersports competitions and shows, operated hover crafts, raced around in ultralights and developed a keen interest amphibious vehicles that led him to start a duck tour company in Miami.

A few years ago, he had the opportunity to share his idea of developing an electric amphibious vehicle with a group of Tesla employees on one of his duck tours. One of them even called Tesla founder Elon Musk and put Langesfeld on the phone with him.

“He puts Elon on the phone, and I tell him, ‘Elon help me make it electric.’ And he goes, ‘Well, you know I got a little project going to Mars but when I come back, we can talk,” Langesfeld said.

Fortunately for Langesfeld, he did not have to wait until after a mission to Mars for his vision to begin to take shape because he eventually found a partner for his idea with Poseidon AmphibWorks CEO Steve Tice.

Tice – a former aerospace engineer at Rockwell and a co-founder of electric vehicle drivetrain company of EV Drive – joined forces with Langesfeld to found Poseidon in San Diego earlier this year.

The company is currently fundraising to build a prototype of an EV amphibious vehicle that will effortlessly turn from a three-wheel car on land to a hydrofoil boat on water.

“No other company doing an EV amphibian hydrofoil,” said Tice. Because of their efficiency, electric hydrofoils are gaining traction in the world with brands like Candela, “the Tesla of electric boats,” he added. “You can match the range of a gas-powered boat with a very small battery.”

Poseidon’s three-wheel design is also unique to previous amphibious vehicles which traditionally modify existing vehicles into amphibians. The Posiedon vehicle will be manufactured in a similar way as the three-wheel vehicles made by Carlsbad-based Aptera, Tice said, adding that one of Poseidon’s advisors is Sandy Munro of Munro & Associates, who is also an advisor for Aptera.

“Aptera will be a big help in our credibility in proving the viability of three-wheel vehicles, the way Candela proved viability of electric hydrofoils,” Tice said.
Poseidon’s vehicle is currently in pre-prototype and current images consist of computer-generated wrappings and do not reflect what the final product will look like.

“Until we get the first million dollars, we’re not going to trigger the detail design and prototype build,” Tice said.

Poseidon is currently looking for that first million dollars on the Start Engine crowdsourcing site.

If successful, the company is looking to disrupt the niche amphibious vehicle market with a $100,000 price tag for its Trident models. Langesfeld – who previously sold WaterCar brand amphibious vehicles, which are priced upwards of $465,000 – said the Trident’s price point is similar to recreational boats “when you take into account you also need to buy a truck that can tow and a trailer and a place to keep those things and the fuel. My idea is to bring something out to the market that makes more sense.”

Tice said previous amphibious vehicles made such little sense that many are not made anymore because they pollute, are unreliable, difficult to maintain and the price made them “more a toy for rich people than a solution.”

Poseidon vehicles, he said, can be a solution for a variety of use cases – recreation, emergency water rescue, yacht tender and commercial uses like taxis.
“I think San Diego needs a project like this. It’s all going in the right direction – eliminating pollution in the water and the air and there are commercial uses,” Tice said. “I can see taxis running across to Coronado in a couple of these.”

The vehicles will offer several advantages for these uses, like the ability to flat tow it behind an RV or truck for adventure camping. Unlike EV boats which rely on regular power at docks to charge, the Poseidon can drive out of the water and fast charge at any charging station. And for people living in flood prone areas, it can operate in 6 inches to 12 inches of depth “with its wheels down,” he added.

Although Poseidon is still in its early stages of fundraising and development, the company has already made some progress with a preliminary mechanical design, with computational fluid dynamics on the foil and thrusters completed. Also, the engineering methods have been picked out and suppliers have been chosen, Tice said.

Langesfeld is confident in the team assembled and in his choice to of Tice as partner in his vision, even if he is not Elon Musk.

“With the two of us, we can make this happen and bring it to market,” he said.