Clarity in Battlefield Conditions Is Aim of ViaSat’s Radios 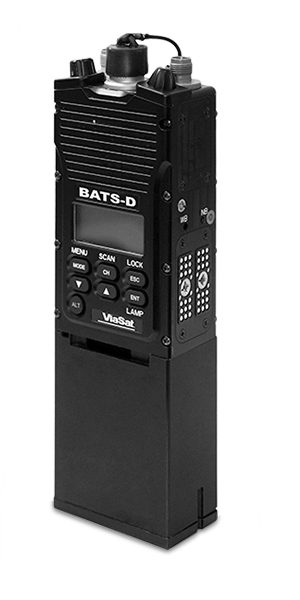 They call them JTACs, short for joint terminal attack controllers, and they have an unnerving job.

They are members of the military who work on foot, uncomfortably close to targets. They call in air strikes, directing how aircraft above deliver their bombs or fire their Gatling guns.

JTACs do their jobs with radios.

ViaSat Inc. is introducing a handheld version of the U.S. military’s Link 16 radio that aims to make a JTAC’s job a little easier. ViaSat (Nasdq: VSAT) executives call it a game-changer, a time-saver and something that could help decrease fratricide — the chance of getting hit by friendly fire.

The new ViaSat radio looks like a walkie talkie (remember those?) but offers the information exchange of Link 16 — which until now was meant for people on aircraft or ships.

Link 16 radios let military units exchange voice and data. They offer individuals a common view of the place where they are going to battle. Everyone sees the others’ sensor data for a shared picture of the battle space.

ViaSat has put its own money into developing handheld devices for Link 16. ViaSat COO Rick Baldridge estimated the company has spent tens of millions of dollars on the electronics over the last five years. (That sum actually went to two projects; it also went into developing what the military calls the small tactical terminal, a 17-pound Link 16 radio that is a little bigger than a lunchbox, suitable for aircraft and vehicles.)

ViaSat is wrapping up development of the handheld Link 16 unit now. Full production is scheduled to begin by the end of the year. The company could potentially deliver tens of thousands of units, Baldridge said in an interview in early June.

Early versions of the handheld radio went to military members at Nevada’s Nellis Air Force Base, who worked with the electronics for five days and then suggested a few changes.

Eye in the Sky: June brought news that Poway-based General Atomics Aeronautical Systems Inc. integrated a UTC Aerospace Systems MS-177 sensor into a jet-powered Predator C, and that the U.S. government funded some test flights early this year. The MS-177 is a part of the family of sensors that goes on the U-2 high-altitude spy aircraft.

The next-generation MS-177 is billed as even more capable than its older brothers. It picks up visible light and infrared radiation in seven bands of the spectrum. It can be upgraded to a 10-band system for maritime use.

Meanwhile, the U.S. Air Force is on track to put the MS-177 on the Northrop Grumman Corp. Global Hawk unmanned aircraft, which can fly at altitudes of 60,000 feet. A special payload adapter makes it possible.

“Opening up the architecture of the air system will provide added sensor technology opportunities through increased competition, which is our goal,” said Col. Darien Hammett, Global Hawk program director at Wright Patterson Air Force Base, in a statement released in mid-June.

Back to news from General Atomics’ aeronautical unit. The company is at work on what it calls Improved Avenger, a larger version of the jet-powered Predator C, and plans to begin flight tests in October. Engineers have increased the wingspan from 66 feet to 76 feet and increased endurance from 15 hours to 20. In addition to carrying intelligence-gathering gear, the aircraft will be able to carry weapons, GA-ASI said.

Short Takes: Lockheed Martin Corp. (NYSE: LMT) will do $4 million worth of work in San Diego on undersea warfare combat systems for U.S. Navy surface ships. Work on the system — which has the unwieldy name of AN/SQQ-89A(V)15 — will be split among several seaport cities. The value of all work is $14.3 million, but the cumulative amount of the contract could expand to $169.5 million if the Navy exercises all of its options.

Farifax, Va.-based ECS Federal LLC will do $261,000 worth of work in San Diego under an information technology deal with the U.S. Navy. The customer is Naval Air Systems Command. Most work will be done in Patuxent River, Md. The one-year contract modification, which runs through June 2017, is worth $8.7 million.

Finding Bugs in Their Crawl Holes: Companies such as Google, Facebook and Twitter offer rewards to people who find glitches in their software.

The Defense Department recently tried that approach and found it saved a boatload of money.

The department billed its Hack the Pentagon project as the first “bug bounty” program in the history of the federal government. Between April 18 and May 12, white-hat hackers were asked to comb through five of the Pentagon’s public-facing websites (nothing too scary or dangerous) to find software vulnerabilities. San Francisco-based HackerOne ran the contest.

Some 1,400 hackers registered and more than 250 of them (including a 14-year-old) submitted at least one vulnerability report. In the end, the program unearthed 138 software bugs. The average bounty paid out for a bug was $588. The worst thing found, an SQL injection issue, earned $3,500.

The Pentagon spent $150,000 on the program, with half the money going to the hackers. Hiring an outside contractor for the work could have cost more than $1 million, the Defense Department said.