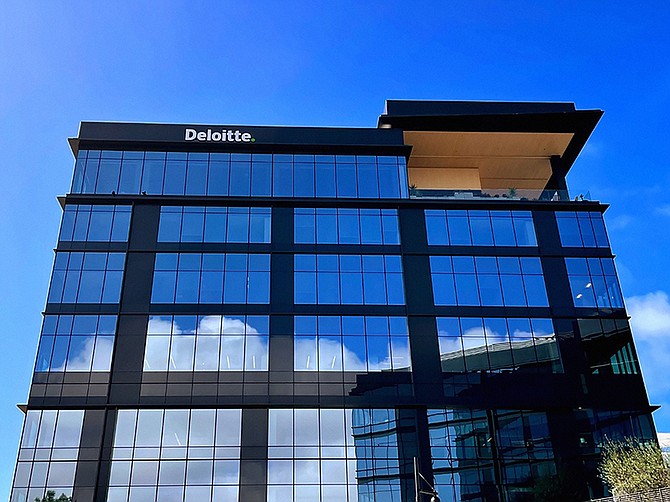 Deloitte’s sixth-floor office in One Paseo has floor-to-ceiling-glass throughout. Photo courtesy of Ryan Gobuty/Gensler.

Deloitte was looking for something special when it moved its San Diego headquarters.

The firm had been in the First Allied Plaza at 655 W. Broadway for a decade in the heart of downtown.

Deloitte has taken the entire sixth floor in one of the two One Paseo office buildings – 32, 976 square feet in what has become a premier project.

The firm retained a downtown presence, leasing 6.536 square feet of space on the eighth floor of Diamond View Tower for its consulting practice, but the bulk of Deloitte’s operations are moving to One Paseo.

“We have a select number of our clients that are downtown but there are so many more that are in North County, it does make it nice to be closer to our clients’ location,” said Juli Moran, Deloitte San Diego Office Marketplace Leader.

An added bonus is that One Paseo also is closer to where many of its staff live, making the commute easier, Moran said.

Deloitte marked its move into One Paseo with the firm’s name in lights on a rooftop sign.

One Paseo is a dramatic departure from the traditional office space of private rooms behind closed doors commonly associated with firms such as Deloitte and one that Deloitte itself had before the move.

“There was no office that ever looked like this,” Moran said.

Moran has been with the firm for 20 years, starting in a conventional office in Chicago’s Prudential Tower.

“It was lots of solid doors, individual partner offices along the wall,” Moran said. “This is definitely a whole new feel.” 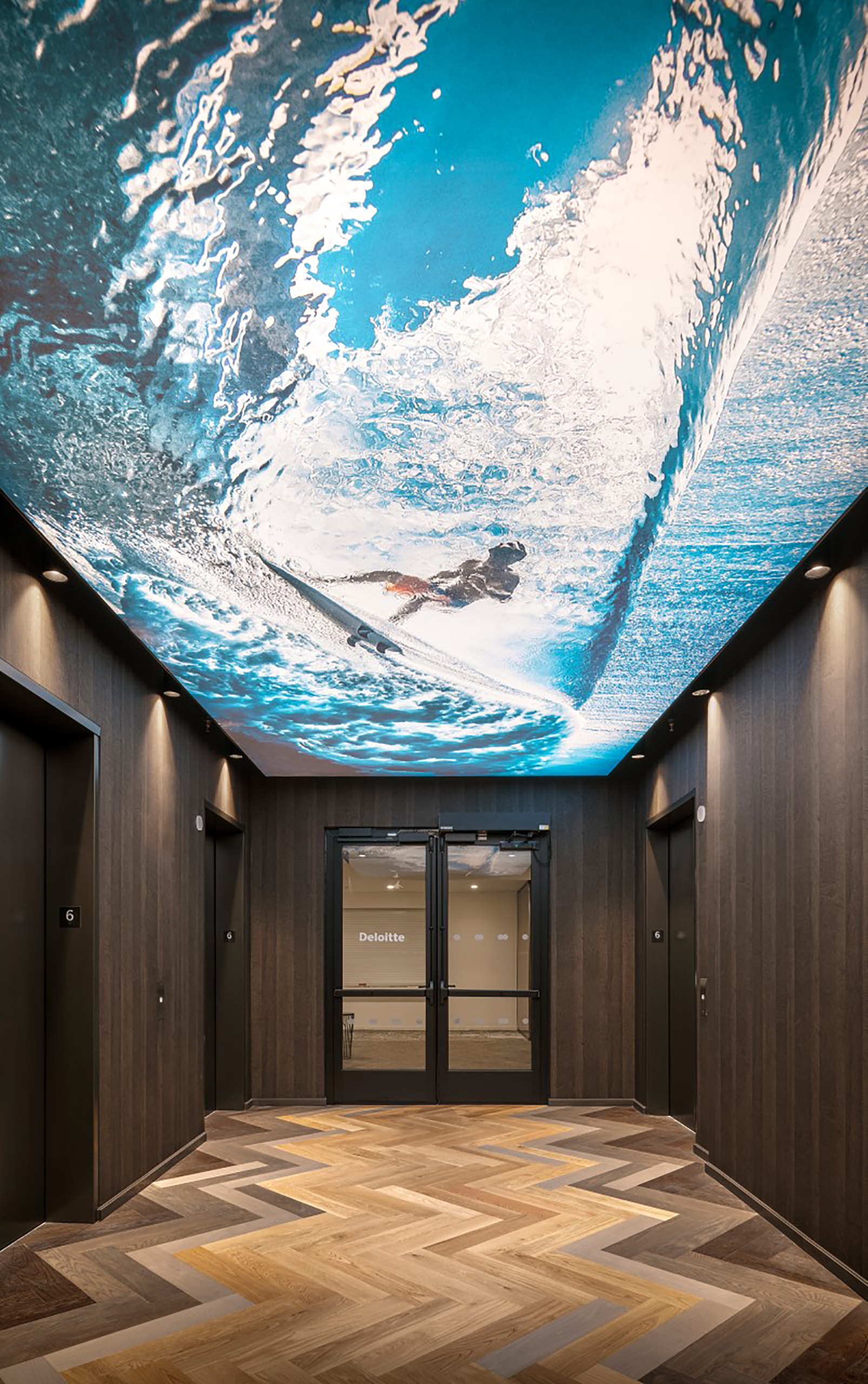 Deloitte's One Paseo office has touches of San Diego throughout, including an elevator lobby lighted ceiling installation depicting a surfer riding a wave. Photo courtesy of Ryan Gobuty/Gensler.

Deloitte’s One Paseo office is big on open space with touches that give the space a very San Diego feel, starting in the elevator lobby with a lighted ceiling installation that depicts a surfer riding a wave.

“We do try to put in specific things that are relatable to the area we’re in so it kind of has the footprint of the local office,” said Kathryn Rado, managing director of real estate services.

Continuing the coastal feel at One Paseo, nine surfboards are built into one wall near a board room, the overall color scheme is reminiscent of a beachy sunset, and a petrified moss wall in the common area depicts a beach scene.

That’s not to say that there are no private rooms in the One Paseo office. There are 23 private offices in the overall suite spread throughout the area, but unlike more traditional designs, they don’t take up prime window space or building corners and they all have natural light through floor to ceiling windows.

In one section, the glass wall opens out onto a 2,000 square-foot terrace that Rado said “is very much a San Diego feature.”

“We probably have the best patio of any Deloitte office globally,” Moran said.

There also are eight private phone rooms scattered about the suite for making calls and for one-on-one meetings, one of which has a treadmill.

For quiet time, there’s a meditation room and a private room for nursing mothers.

“No matter what you need, when you come here, you’re comfortable,” Behen said, with soft sofas and chairs throughout much of the space, nearly all of which are wired so people can use them as work stations.

“This is set up with the idea that it’s really all about that collaboration, being able to have a space where you can meet privately or in small groups,” Moran said. “That small group collaboration space is definitely the future of our offices.” 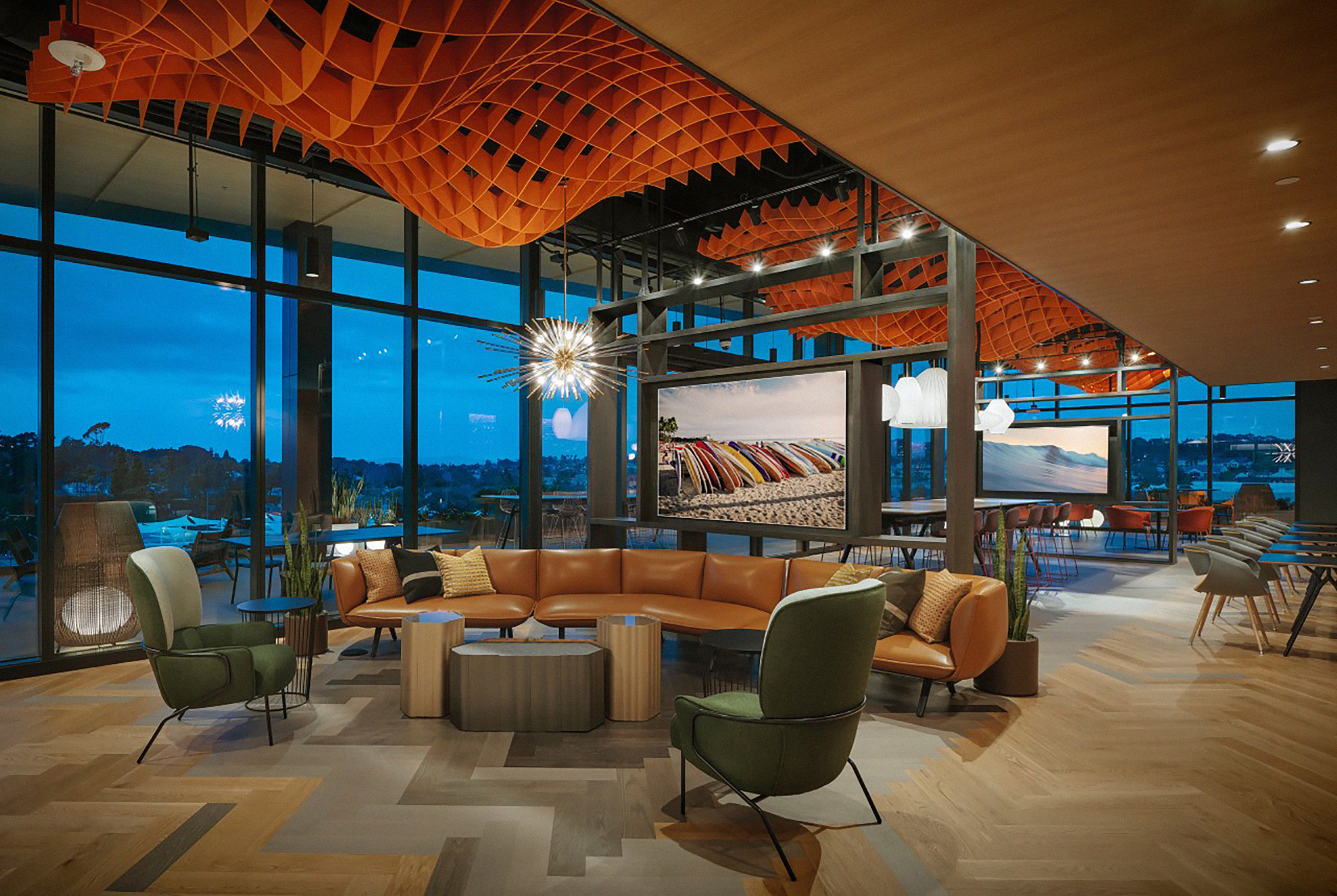 Deloitte's One Paseo headquarters was designed with a wide open look. Photo courtesy of Ryan Gobuty/Gensler.

When Deloitte moved into 655 Broadway in 2009, most of the big accounting firms were downtown, Weixel said.

“That was where the business center was and that made sense. In most major cities, big accounting firms are downtown,” Weixel said.

Since then, Deloitte’s client base has shifted and the firm is making a concentrated effort to focus on life science companies.

“We had explosive growth,” Weixel said, adding that the firm was “bursting at the seams.”

“We don’t have that kind of rapid growth too often in our marketplaces. That was putting a strain on our office,” Weixel said.

With its lease due to expire in 2019, Deloitte starting looking for a new location in 2017 through the commercial brokerage firm Cushman & Wakefield.

“They went out and canvassed the area of what we call UTC, all the way up through Del Mar, over all the way east to the (Interstate)15,” Weixel said. “Nobody really wanted to go to UTC because of the traffic and the difficulty going east and west.”

Then One Paseo popped up.

“It is in the middle of the life science community, so I liked that,” Weixel said. “Everything else that we looked at was an existing building that someone had vacated and we would have to retrofit.”

One Paseo also gave Deloitte the ability to have everyone on one floor.

Deloitte had 1/1/2 floors at 655 W. Broadway – all of the seventh floor and half of the sixth floor.

The catch was that One Paseo wasn’t going to be finished when Deloitte’s lease ran out at 655 W. Broadway.

Deloitte was able to extend its lease until One Paseo was available, but shrunk the size of the space it leased.

As a firm, Deloitte is reducing its real estate footprint in most areas. San Diego is an exception because the firm’s San Diego business was growing so rapidly, Weixel said.

“The firm not only approved the One Paseo location, but they also approved the increase in space,” Weixel said. 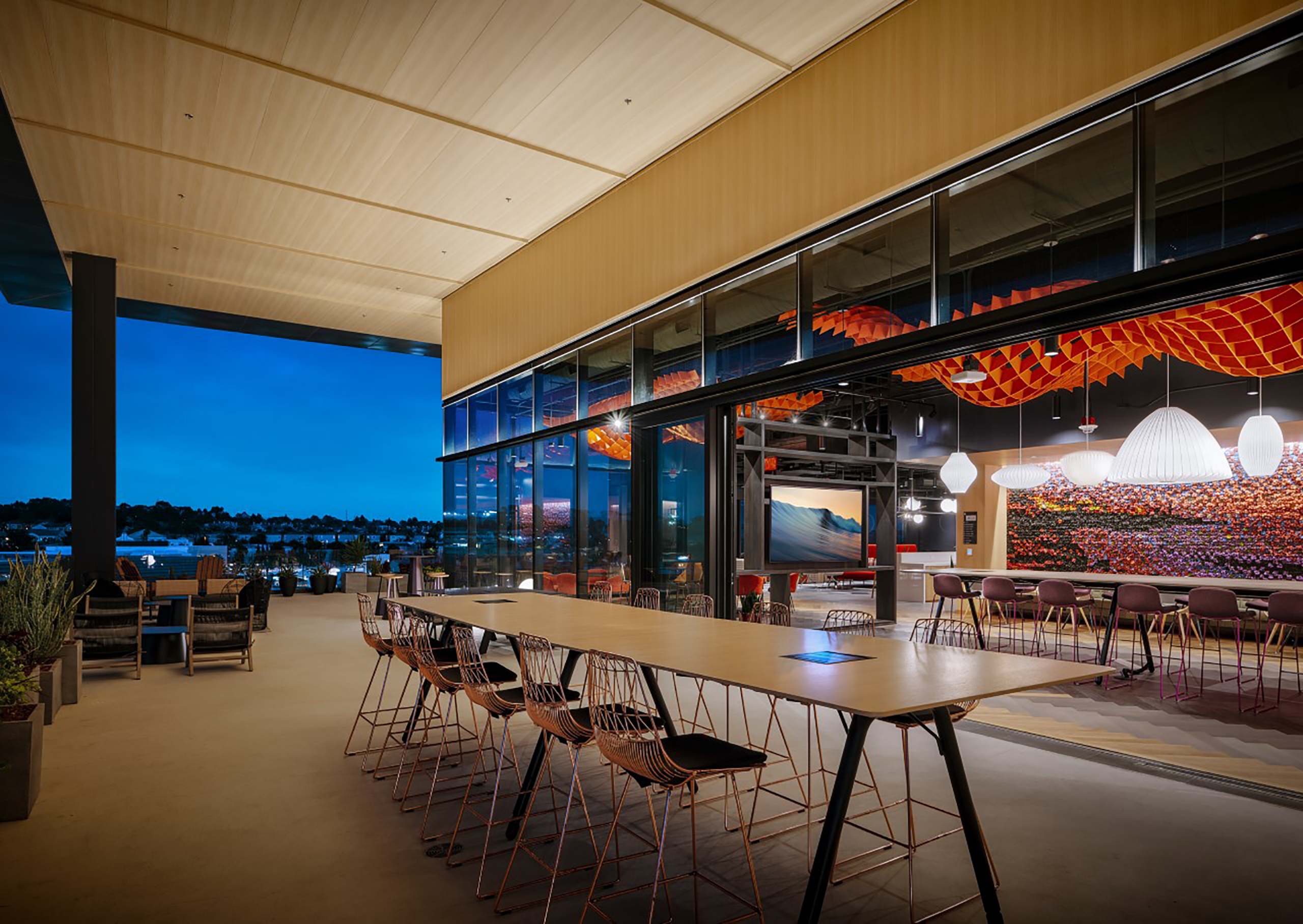 The view from the terrace looking into the common area (featuring petrified moss) and a picture of La Jolla. Photo courtesy of Ryan Gobuty/Gensler.

“Our design is very focused on collaboration, teaming, community building because what we heard back from our staff is they come in to connect with other staff members and connect with leadership,” Rado said. “We really are designing to facilitate that given the openness. It really affords a lot of formal or informal meeting space.”

Where in the past the firm has favored classic high-rise buildings , “We are much more open to looking at these live-work-play options like One Paseo,” she said. “We really like One Paseo because it offered up a different solution, lower rise, closer to where folks live.”

Turner Construction was the general contractor on Deloitte’s One Paseo office. Gensler was the architect.

When Deloitte’s staff will start working in One Paseo is an open question due to the COVID-19 pandemic.

“We are hopeful, because of the design of the office and the amount of space that we will be able to get more people into the office sooner,” Moran said.

NOTABLE: Deloitte provides audit, consulting, tax and advisory services to many of the world’s most admired brands, including nearly 90% of the Fortune 500 and more than 7,000 private companies. The firm was founded by William Welch Deloitte in London in 1845 and expanded into the United States in 1900.