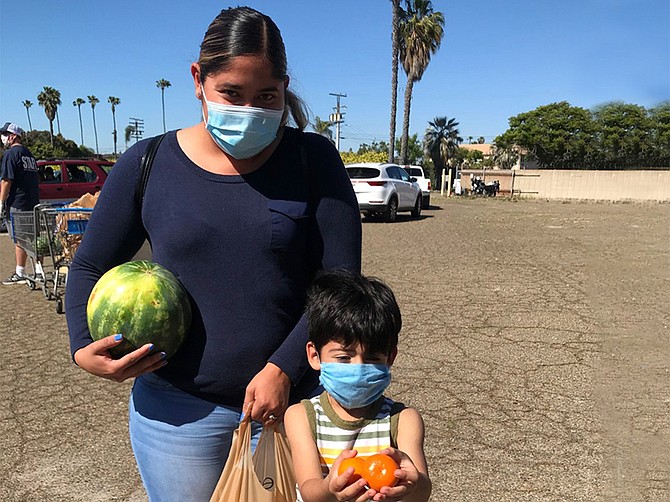 “He decided to do this all by himself,” said Kathryn Lembo, president of South Bay Community Services. “He just called me one day and said, “I don’t think people should go without food.’”

Baldwin is a major residential builder in South Bay as the master developer of Otay Ranch.

A regular donor to the social service agency, Baldwin said he decided to start the fundraiser when he saw that people were lining up to get food when the pandemic hit.

“It’s really a great cause and a great need,” Baldwin said. “One of the most basic needs, besides shelter, is food.”

Construction was deemed an essential business from the start, so Baldwin said he felt the industry should step in to help those who worked in jobs that weren’t classified as essential.

“Our suppliers and our associates have been very supportive, our sub-contractors, anywhere from bricking companies to framing companies to engineers, what have you,” Baldwin said. “They work in the community and they realize this is a community responsibility and they’re stepping up.”

Headquartered in Chula Vista, the community service agency has been hard-pressed to meet the demand for food from displaced workers and their families.

As of the first week in June, the social service agency had distributed 50,000 bags of food, Lembo said.

When the pandemic was at its peak, South Bay Community Services was handing out about 2,000 bags of food a day, three days a week every Tuesday, Wednesday and Thursday, Lembo said.

With businesses starting to reopen, Lembo said food distribution has dropped to between 1,400 to1, 600 bags a week.

“It leveled off at about the time things were starting to open up and people were getting their unemployment checks,” Lembo said. “It’s still much higher than it used to be, way much higher.”

Prior to the pandemic, she said the agency handed out about 450 bags of food a week.

“I would like them to drop because that would mean people are not in such dire need. We’ll continue food distribution. We’ll always do food,” Lembo said. “We may see some leveling off. I don’t think we’re going to go back to pre-COVID because I think some people’s jobs are permanent job losses.”

South County also has had more COVID-19 cases than other areas of the county, which means more people can’t go back to work yet, Lembo said.

Even if the demand for food eases, the agency had to cancel a key fundraiser because of the pandemic and “There’s plenty of other things we need help with,” Lembo said.

Housing for people who have been forced out of their homes because of the pandemic, is a big one.

People who may have been doubling up with other families have been forced out because of social distancing concerns, Lembo said.

The agency has received 10 recreational vehicles from the state, which it plans to use for homeless housing, and provides rental assistance.