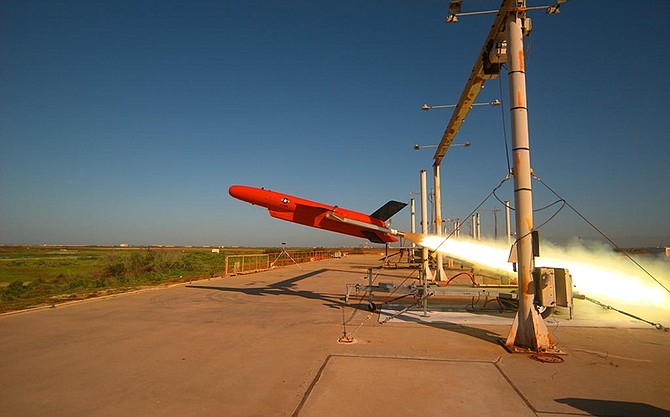 A BQM-177A subsonic aerial target takes to the air in May 2017 at a U.S. Navy facility in Ventura County. Photo courtesy of U.S. Navy

The U.S. Navy reported on Feb. 28 that its BQM-177A target drone built by Kratos Defense and Security Solutions Inc. was ready for war games. In Navy lingo, it achieved initial operational capability.

The BQM-177A drone is a recoverable target that will replace the legacy recoverable BQM-74E target. The new model has been modernized and has increased capability. The subsonic target can achieve speeds in excess of Mach 0.9 — nine-tenths the speed of sound, or about 675 mph at sea level. Travel at sea level is the target’s specialty; it can skim over the ocean at altitudes as low as 10 feet, simulating an anti-ship cruise missile.

In a prepared statement released March 5, Kratos Unmanned Systems Division President Steve Fendley said the company appreciates its team relationship with its Navy customer. “We look forward to continuing to support the Navy for many years to come with the BQM-177A system and its abilities to replicate current and evolving threats.”