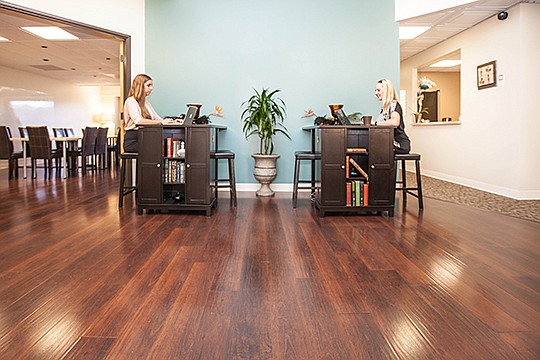 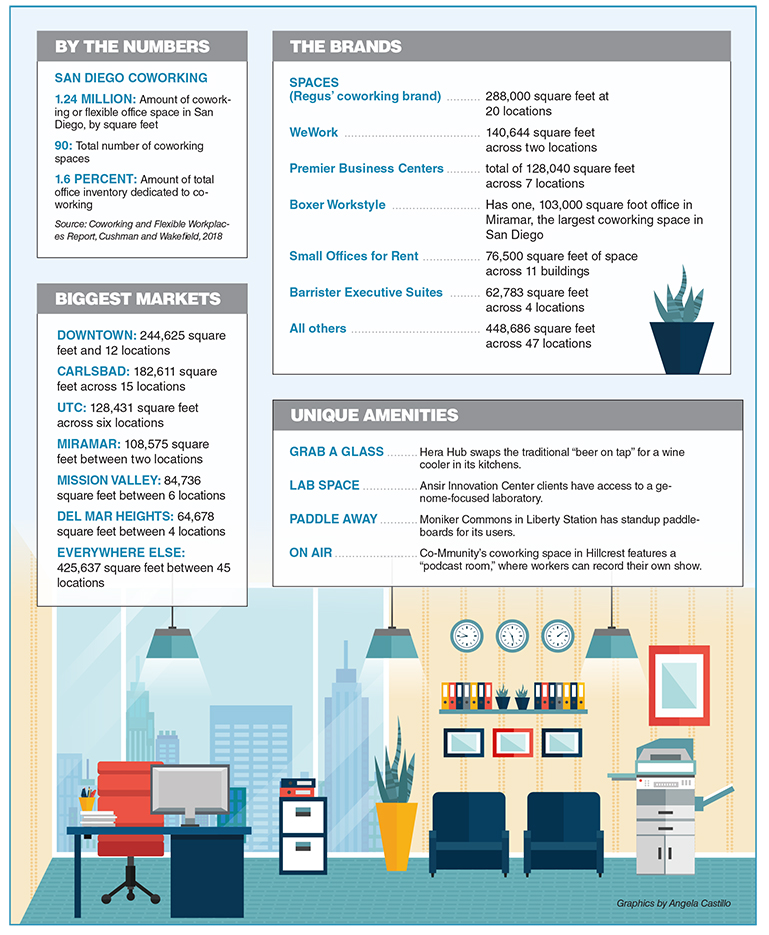 San Diego Co-working By The Numbers

San Diego entrepreneurs have plenty of options to choose from when deciding where to rent a desk. In addition to the big national brands, there are coworking spaces specifically designed for biotech companies, for women, and even for nonprofits.

With so many coworking options popping up across San Diego, you might think the market had reached a saturation point. But according to local coworking leaders and real estate advisors, there’s plenty of demand to go around.

“It’s not going away,” said Andrew Ewald, First Vice President for CBRE in San Diego. “There are a number of different groups looking at space to create more coworking in San Diego.”

Coworking spaces surged with the need for tech startups to find affordable offices where they could scale their business as needed. But in San Diego, and across the U.S., they have morphed into flexible spaces that appeal to a much wider array of businesses.

Even though San Diego has more than 90 shared office spaces, coworking accounts for just 1.51 percent of San Diego’s commercial real estate market. Those numbers are ticking upward, Ewald said, as local entrepreneurs look for a place to house their budding businesses. Larger corporations are also looking to coworking to test out new markets for future satellite offices, provide flexibility for traveling employees, or reduce their capital expenses.

“We’ve had a strong relationship with the startup and small business community for years, but enterprise companies are beginning to understand the value our platform brings and represent our biggest growth segment at the moment,” Kley Sippel, general manager for Southern California for WeWork, said in an emailed statement. “Our hottest demand right now is for large offices for teams of 50 or even 100 ...what’s popular, though, is the ability for these teams to also book hot desks around the world as they travel.”

Some of that demand may have spurred WeWork to open a second space in University City just two years after it first entered the San Diego market with offices downtown. Ewald forecast more shared work spaces will open in downtown and UTC, which have drawn the most coworking companies with their dense business districts and plethora of talent. But Ewald is also watching Carlsbad, Mission Valley and Del Mar Heights for future growth.

“(Work) is just so dynamic and changing in San Diego that you’re seeing more businesses think differently about this,” he said.

Coworking’s success in San Diego might also be because there’s no one-size-fits all approach. While the term conjures up images of trendy workspaces for young, tech startups, the flexibility and social benefits that come with it draw a much wider crowd.

“We see everything from high-school seniors to retired workers. We see people who are in transition from military to civilian life. From tech to fashion,” said Jamie Miller, founder and CEO of San Diego-based Union CoWork. “It’s something I’m proud of because that’s what I wanted — an inclusive environment that gave people the benefits of connecting with other diverse people.”

Miller has grown his neighborhood-centric coworking concept to eight locations spanning Los Angeles and San Diego. Instead of having Union CoWork spaces be an office you drive to, Miller plans his expansions around walkable and bikeable neighborhoods. He even picks out art from antique shops in the same neighborhood as his spaces, which have a modern aesthetic.

“People want to be near their kids and investing in their neighborhoods,” he said.

Most of Union CoWork’s users range from one to 10-person companies. For them, the biggest draw is the ability to get fresh ideas by meeting people in other industries. Miller said he’s seen people meet their future business partner — and even their future spouse — from these conversations.

Brian Tustin, general manager of hospitality for Moniker Real Estate, said the Liberty Station collective had a similar goal when it opened its first coworking space, Moniker Commons. Moniker Group already had a coffee shop, design and furniture business under its belt, which it tapped to create the new space.

“Initially we had a coffee shop open, Moniker General. It’s a great place to create community. People congregate around food and drink,” Tustin said. “We noticed a lot of people that were coming to Moniker General and working. We saw an opportunity to put something in Liberty Station that’s not here and in another form create more community.”

So far, Tustin said, the experience has been different from his initial expectations. The space has brought in everything from tech startups to public relations to an unnamed global public company with local offices.

Felena Hanson, founder and CEO of Hera Hub, has seen a number of coworking spaces come and go in San Diego. She founded her coworking company in 2011, making it one of the longest-standing in San Diego, with three locations in Mission Valley, Sorrento Valley and Carlsbad.

Hera Hub’s niche is providing a space for female entrepreneurs. The spaces look more like a home than an office, with wooden coffee tables and big couches, and have hints of a spa, including fountains and water sounds.

Hanson said she’s seen more women in professional services, such as law, finance or marketing, find a use for the space as they manage their businesses. That’s turned out to be an advantage, leading to more stability than a tech startup looking to make it to the next round of capital.

“We have quite a few members that have been with us since the day we opened over seven years ago,” she said. “Interestingly, a lot of space is still targeted toward the younger, techy market. I like to say there’s a place for everyone.”

In general, Hanson said she’s seen more segmentation in coworking than when she first opened Hera Hub, with spaces designed for social entrepreneurs and even offices in a rock-climbing gym. But they all still have one thing in common: the ability to appeal to people’s need to work with others.

“Our membership base is looking for community first over anything else,” she said.