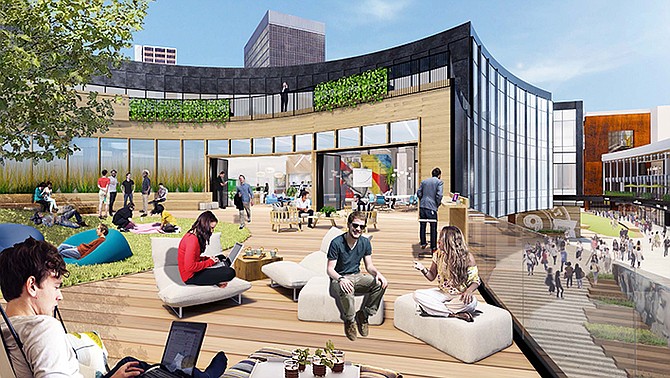 The former food court at Horton Plaza will be converted into what its new owners call an amenity deck. Rendering courtesy of Stockdale Capital Partners 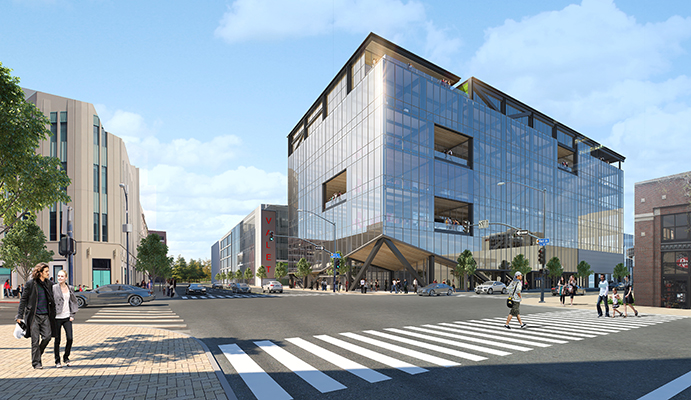 The former Nordstrom department store will be expanded with a glitzy new look to the exterior. Rendering courtesy of Stockdale Capital Partners

In its time, Horton Plaza started what became the transformation of downtown San Diego from a place no one went to a place everyone wanted to be.

Its time has come again, according to its new owners, who say the revived Horton Plaza will lead a new transformation as a magnet for people who want to live and work in a vibrant urban setting.

To do that, they recently won preliminary city approval to cut in half the amount of retail space from the 600,000 square feet that was required in deed restrictions to 300,000 square feet.

The idea is that downtown, with its plethora of new apartment and condominium towers, cries out for places where people who live and play downtown can complete the cycle with nearby places to work rather than commuting to suburban locations like UTC and Sorrento Valley.

“There’s been 8.5 million square feet of multifamily delivered downtown in the past nine years and 60,000 square feet of office,” said Dan Michaels, managing director of Stockdale Partners. “There is just virtually no office.”

About two-thirds of the people who live downtown commute to work elsewhere.

“People are very focused on getting jobs downtown, and that’s what this does,” Michaels said.

Although the design is still in flux, a key element in turning Horton Plaza from a retail fortress that was shut off from the surrounding neighborhood into an inviting office campus is opening up the mall to more natural lighting.

When it opened in 1985, Horton Plaza was an island in the midst of a part of San Diego that had been known as the Stingaree District — known for its bars, strip clubs and disreputable characters who frequented the area.

With the evolution of the Gaslamp Quarter as a dining and entertainment mecca and the shift of retail shopping away from big malls, the old Horton Plaza is an anachronism, Michaels said.

“The idea of an infill mall is largely obsolete,” Michaels said.

Renovations will start once the city gives its final approval. Stockdale Partners hasn’t said what it will cost, but the work will be extensive.

“Short of tearing the thing down, we’re going to be completely opening up the project,” Michaels said. “We’re not scrapping it but there’s going to be a pretty great departure in terms of the architecture.”

Among other things, the interior concrete walkways that interweave among the various levels almost like a maze will be removed to open up the center to give it an airy feel.

The section that had been a food court will be converted into what Stockdale is calling an amenity deck.

The former Nordstrom building will get a complete overhaul, adding 150,000 square feet of space and a glitzy new exterior.

Inside, the building will have what Stockdale described as “forward-thinking and light-filled workspaces” with expansive views of downtown and San Diego Bay.

Although the old food court will be gone, the new Horton Plaza will have “multiple food and beverage operators which bring life to that area,” Michaels said.

“We’re going to be partnering with local purveyors and shops, bringing in new concepts in that park that will be really impactful,” Michaels said.

The parking garage will be retained as an amenity and a marketing tool.

When it’s finished, Stockdale Capital estimated that 3,000 to 4,000 people will work in what it has renamed The Campus at Horton.

Matt Sanford, economic development director of the San Diego Regional Economic Development Corp., said a renovated Horton Plaza provides “an opportunity to really bring our innovation economy to downtown in a way that we just haven’t been able to realize.”

Sanford said companies “are looking for relatively large spaces” that will be available within 18 months.

The Campus at Horton will provide that, and serve as a catalyst for other projects that will bring jobs downtown, Sanford said.

“Horton Plaza, at the time it was built, was really kind of a visionary development for downtown,” Sanford said. “The way retail has evolved, especially over the last decade or so, those types of malls and retail shopping environments are not as necessary to the urban living experience.”

Betsy Brennan president and CEO of the Downtown San Diego Partnership, said Horton Plaza “was a groundbreaking project for downtown revitalization the first time around and this second revitalization is going to bring increased renovation, safety activation and wonderful things for an underutilized space right in the heart of downtown.”

“The Gaslamp (Quarter) and Horton Plaza are an area that has enjoyed more than 30 years of vibrancy for the residents and visitors of downtown and it’s at a critical juncture,” Brennan said, adding that Stockdale Capital Partners has shown that its concept for Horton Plaza can work.

The company transformed a former downtown shopping mall in Scottsdale, Arizona, into the Galleria Corporate Center, “which prompted an urban renewal,” Brennan said.

Ryan Grant, a first vice president at the commercial real estate firm CBRE, said he’s heard from a number of companies that have been eyeing Horton Plaza.

“It’s on the radar of a lot of potential larger users,” Grant said. “A lot of people were waiting to see if the variance was going to come from the city regarding the retail.”