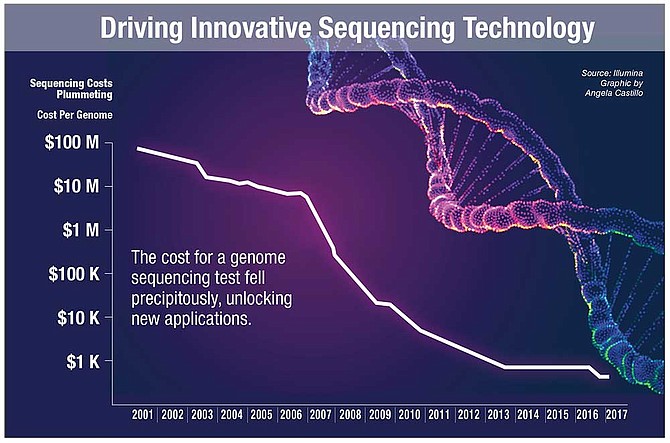 Last year, Illumina launched a DNA sequencer that’s anticipated one day to drop the cost for a genome sequencing test to $100. This moved the biotech industry closer to a dream of making genomics ubiquitous in medicine — and creating new genomics avenues ripe for entrepreneurs.

The free-fall owes much to technology leaps from San Diego-based Illumina, which formed in 1998 and in recent years cemented its place as king of sequencing equipment. Worth listing, then, a few company milestones that paved the way for expectations of a $100 genome test:

Illumina in 1999 brought on as CEO Jay Flatley, who grew Illumina’s revenue from $500,000 to $2.2 billion in a 17-year span. Widely hailed for execution that drove down sequencing costs, Flatley handed the reins to Francis deSouza in 2016, and stayed on as executive chairman.

In 2007, Illumina acquired Solexa and its sequencing by synthesis system, which Illumina says remains at the heart of its technology.

Illumina in 2014 introduced its HiSeq X, enabling a full human genome to be sequenced for $1,000. Now Illumina’s top sequencer is the NovaSeq 6000, the one anticipated to usher in the $100 genome. It runs just under $1 million.

Making sequencing more accessible sparked a slew of upstarts that buy Illumina machines. So no surprise that Illumina has fostered this ecosystem through initiatives like Illumina Accelerator in San Francisco, which is also open to companies outside the area.

Sequencing costs aren’t the only factor in wider adoption. Critical too: quickly analyzing a plethora of genomics data, which is why in May Illumina acquired San Diego-based Edico Genome for $100 million, gaining processing power.

The purchase brought Illumina closer to machines with a standardized, push-button process for secondary data analysis, whereas customers have been stitching together a few tools.