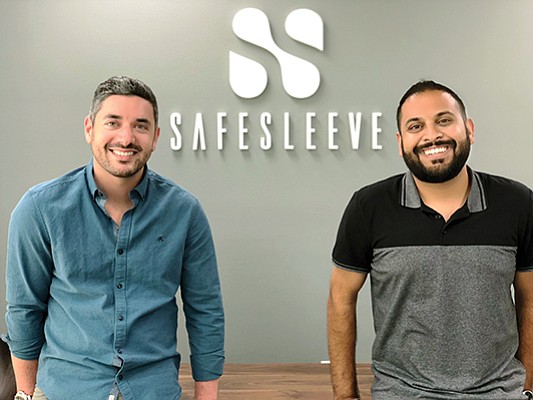 Cary Subel, left, and Alaey Kumar are co-founders of SafeSleeve, one of many companies selling products that block radio frequency energy from cellphones, tablets and laptop computers. Photo courtesy of SafeSleeve

Cary Subel and Alaey Kumar have built a business on the foundation of technology — specifically, public unease over technology. 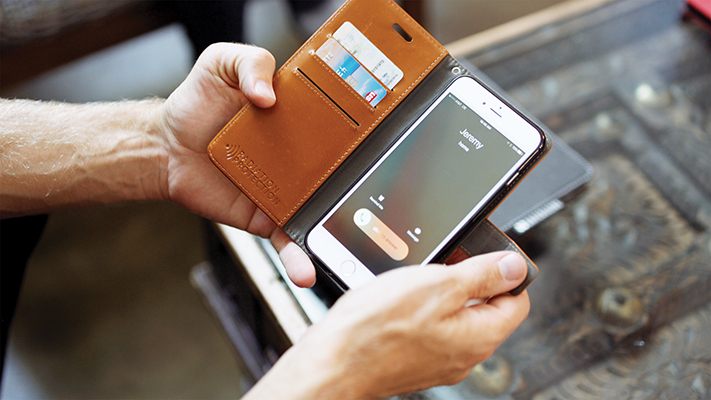 Some people fear that their cellphones — those constant and indispensable companions — might be doing them more harm than good.

No one can say for sure whether cellphones cause medical problems, and if so, how harmful they might be. In December, the California Department of Public Health issued guidelines for individuals and families who want to limit exposure to radio frequency energy emitted from cellphones, noting that use was going up among children.

“Although the scientific community has not reached a consensus on the risks of cellphone use, research suggests long-term, high use may impact human health,” the state said.

SafeSleeve is not the only company in their market. Competitors include DefenderShield, RadiArmor and RF Safe Corp. WaveWall’s website urges potential users to “protect your manhood,” alleging that cellphones affect male fertility. In addition to shielded phone cases, WaveWall markets shielded underwear. All of the websites make the argument that cellphones are dangerous, if not deadly.

SafeSleeve’s Subel claims the science about cellphones is being suppressed, as was the science on the dangers of cigarettes. Part of his company’s role is educating people about the issue, he said.

Subel and Kumar won’t disclose sales figures, but say their company has shipped more than 100,000 cases since SafeSleeve’s launch in 2011. Sales grew fourfold in the last year, Subel said, and grew more than four times in the year before that. Growth, Subel said, is being driven by public awareness about the radiation issue.

Initially the pair shipped their products from the garage at Subel’s parents’ home in Carlsbad. To hear Subel describe it, last year’s pre-Christmas season turned the garage into something like a hedge maze, with stacked boxes and pathways running between them. Following that experience, SafeSleeve moved into a small warehouse and office unit in a building five minutes away.

Subel and Kumar, both 29, met when they were students at Cal Poly San Luis Obispo. They started their business by designing and marketing a laptop computer case meant to shield its user from electromagnetic radiation.

Subel said he became concerned when a friend of his father advised him that a person should not use a laptop while it’s perched on the user’s lap. He started developing a pad that would sit between the laptop and the user’s legs. That eventually became SafeSleeve’s laptop case.

The cellphone case came later, but that has emerged as the company’s biggest seller. SafeSleeve also produces cases for tablets. Its new product, called the lapdesk, sells for $69.95. Cases for the new models of Apple iPhones will be available in a few weeks, Subel said in a late September interview.

The two import their finished products from China. The partners would not say what sort of blocking material they use in their products, though it appears to be a metallic foil. Subel said he experimented with 100 materials before getting the product right. He said the company is pursuing patents.

Loans from their families have gotten the business to where it is now, the two partners said. Also helping were crowdfunding campaigns on Kickstarter and Indiegogo.

Asked about lessons learned during his time in business, Kumar said the company has become more aware of the product development timeline. The partners take care to make their products look aesthetically pleasing, yet, there is a danger that a competitor can come to market ahead of you. Subel and Kumar now see value of releasing a product before it has been perfected all the way.

SafeSleeve products are available on Amazon.com’s website and through the company website. The business prefers digital advertising, including Facebook and YouTube, and makes use of online influencers. Looking ahead, Subel said he wants to increase digital marketing and sell in retail stores — though the company is already in a few small retailers. SafeSleeve has also lined up a few international distributors.

In addition to electronics cases, Subel is a partner in a second Carlsbad business. Shiplab offers fulfillment, warehousing and third-party logistics for several Southern California businesses.