The former Pratt & Whitney campus in Kearny Mesa has been renovated. Photos courtesy of Dempsey Construction

Five Kearny Mesa industrial buildings that were once home to the aerospace manufacturer Pratt & Whitney have been transformed into an office and warehouse campus.

The cost of the renovation was not disclosed.

The San Diego plant made aircraft auxiliary power units that provided electrical power for planes while they were on the ground and back-up power for in-flight operations.

LBA Realty of Irvine acquired the Pratt & Whitney site in December 2016 for about $25.2 million from United Technologies Corp. 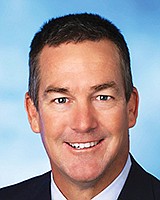 Transforming the buildings to meet the demands of modern tenants was a challenge in part because of the age and construction of the buildings. The buildings were built in stages, with some dating back 37 years.

At the time, the buildings had a total of about 280,000 square feet of space, but some of it wasn’t suitable for what tenants want, said Brad Black, first vice president of the commercial brokerage firm CBRE in San Diego.

Among other things, the ceilings were too low for a modern warehouse distribution client.

“In place of what we demolished, we attached a brand new, 106,000 square foot, cutting-edge warehouse,” Black said.

The renovated campus was designed to accommodate multiple industrial tenants leasing from 25,000 square feet on up of warehouse space.

The existing office space was gutted and the main lobby on the east side of the building facing Ruffin Road was completely redone.

“There was a lobby before, but it was darker and hadn’t been appointed with new floor coverings and wall coverings for some time,” Black said. “We changed out the lighting and added a staircase.”

In addition to remodeling the existing lobby, a second lobby was added on the south side of the building.

“We added skylights, we created a large central patio on the east side of the property that could be used for lounging, collaboration, or it can be created as an indoor/outdoor environment for the adjacent offices,” Black said.

The exterior also was extensively remodeled, with new windows added to replace faux windows that had been along much of the wall.

“We added about 30 percent to the existing window line,” Black said. “Tenants want natural light in a big way.”

He said that the renovated office space was designed to accommodate one to four tenants.

Asking lease rates are $2.05 per square feet for office space in the campus and $1.10 for industrial/warehouse space, Black said.

“For industrial in San Diego, $1.10 is quite high, but because of the central location and because there’s so much activity on the last mile front for distributors, it’s an achievable rate,” Black said.

Last mile is a term used for distribution services that deliver goods from a central location to their destination.

The office rates are 10 percent to 20 percent below what some comparable property is going for, but rates for the warehouse space have been set higher than is typical for the area, Black said.

The renovated Pratt & Whitney campus comes to the market at a time when office and industrial space is in high demand in central San Diego County.

The commercial real estate brokerage firm of Cushman & Wakefield reported that the vacancy rate for Kearny Mesa industrial property in the third quarter of 2018 was 3.9 percent.