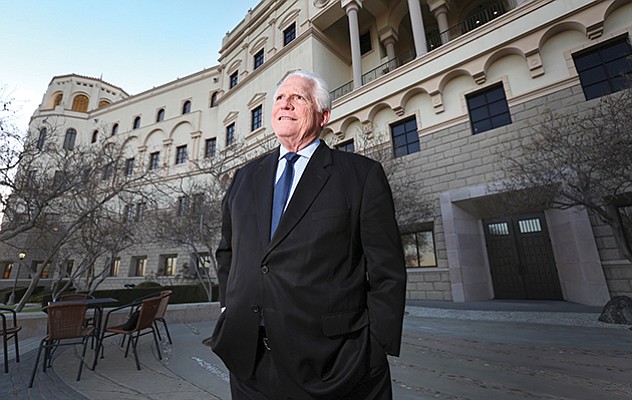 “There is virtually no business that doesn’t require cybersecurity and someone to take care of it,” says Gordon Romney, director of the University of San Diego’s Center for Cyber Security Engineering and Technology. Photo by Jamie Scott Lytle.

“There is virtually no business that doesn’t require cybersecurity and someone to take care of it,” said Gordon Romney, director of the University of San Diego’s Center for Cyber Security Engineering and Technology. “The job postings continue to grow. It’s difficult to meet the need. Anyone getting into this field will have job security for at least the next 20 years.”

Cyber security is one of the San Diego region’s strongest economic sectors, “but we are behind the power curve on talent,” said Ken Slaght, a retired rear admiral who serves as co-chair and president of the nonprofit San Diego Cyber Center of Excellence (CCOE).

According to a 2016 study conducted for the center, cybersecurity has a $1.9 billion impact on the San Diego region’s economy. The study found that the region had 7,620 direct cybersecurity jobs, an increase of nearly 15 percent from 2014.

Unfortunately, there aren’t enough cybersecurity experts in the field to keep up with the demand for combating online crimes. To reverse this trend, the center is tapping into the region’s education system.

“All the universities are aware this is a growing market,” Slaght said. “They are stepping up to the plate.”

An increase in the cybersecurity workforce can’t come soon enough. “The number of attacks that occur daily that originate from rogue nations is phenomenal, said Romney. “It is affecting Americans in all walks of life. It is only going to get worse. We’re trying to improve our control over it, but it’s tough.”

A Center for Cybersecurity Training

San Diego has become a center for cybersecurity training because of the strong presence of the military and defense contractors, Romney said. Many of USD’s cybersecurity students work at such firms as Cubic Corp., Qualcomm Inc., Northrop Grumman, Science Applications International Corp. (SAIC), and the Space and Naval Warfare Systems Command (SPAWAR), he noted. Others are military personnel or veterans who are developing skills they can use in the civilian workforce.

The first wave of cybersecurity graduates from USD and other local schools now is beginning to reach the workforce.

USD has more than 140 students enrolled in its online Master of Science in Cyber Security Operations and Leadership program. About 60 students are enrolled in USD’s classroom-based Cyber Security Engineering master’s program. Both programs began in 2015. There have been nine graduations from both programs so far, but another 80 graduations are expected in the spring.

Training people to fight cybercrime is only half the battle. Slaght said another challenge is to prevent local cybersecurity graduates from being lured away to higher paying jobs in Northern California. Internet technology firms such as Google and Apple “offer extraordinary salaries and the companies here can’t compete on that level,” he said.

What San Diego firms can do is make sure graduates understand that Northern California has a higher cost of living and a less inviting climate, he said. He noted that people don’t need a master’s degree to work in cybersecurity.

“Cyber has a whole educational continuum,” he said. “It starts after high school, where you can go online and earn a certificate or two. Then you get an associate degree. You can work and do this at night, then move up to a four-year degree.”

National University was among the first schools in San Diego County to offer a master’s degree in the cyber protection field, beginning in 2011. A bachelor’s degree program was launched there in 2017. The programs, which are available online or in the classroom, have about 300 active students and several hundred alumni. About 70 percent of cybersecurity students at National University are present or past members of the military.

Chris Simpson is director of the National University Center for Cyber Security And Information Assurance. He noted that the school has been recognized by the National Security Agency and Department of Homeland Security as a Center of Academic Excellence in Cyber Defense Education.

An online version of the program soon will open, said Teresa Macklin, chief information security officer and associate dean for instructional and information technology services. The degree program began in the fall of 2015 and produced 10 graduates in the spring of 2017. It is expected to grow as businesses strive to fend of cyberattacks, she said.

Macklin noted that companies that develop new products need cybersecurity experts to keep their trade secrets safe. Businesses in the health care field must keep the personal information of patients confidential. Attorneys and accountants are expected to keep their client information secure from cyber thieves. Retail outlets that accept credit cards have a responsibility to protect their customer’s payment information.

“There is no place where cybersecurity isn’t relevant,” she said.