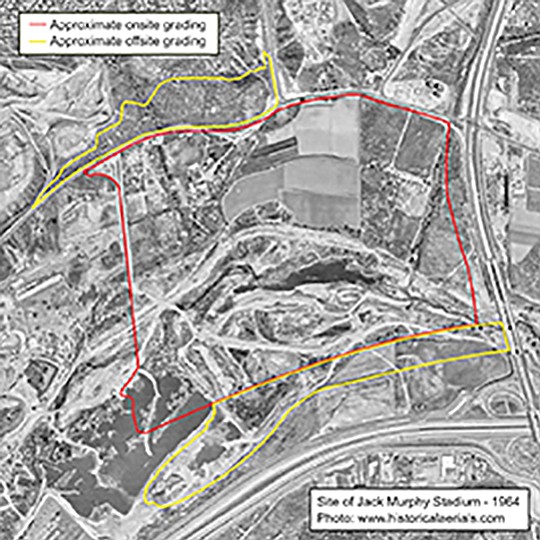 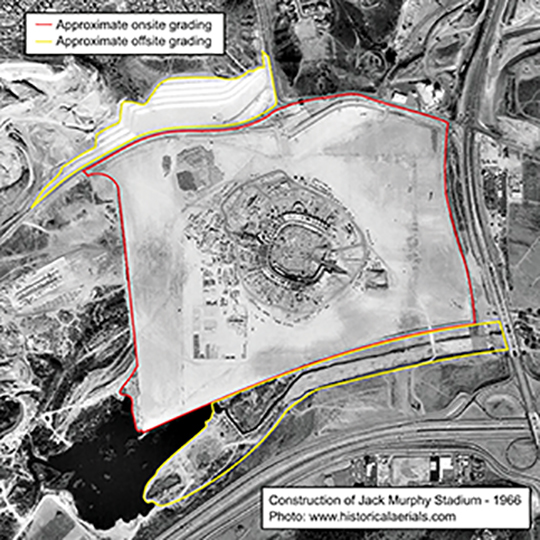 This photo from 1964 and 1966 shows the Mission Valley stadium site prior to being graded. Soil from the farm fields on higher ground at the top of the photo was used as fill lower ground at the bottom of the site, producing a more level surface for the stadium and parking lot. Photos courtesy of www.historicalaerials.com

San Diego — As San Diego debates what should be done with the former Chargers’ stadium site, and stakeholders debate the current status of the remediation of the petroleum plume from the Mission Valley terminal tank farm, there are potentially other environmental issues that shouldn’t be overlooked. While the site doesn’t have much in the way of historical industrial land uses, it does have a history of large-scale commercial agriculture.

Many people think of farms as a benign land use; the truth is far different. There are numerous sources of environmental contamination on farms, especially at the commercial scale. Such operations often had their own gasoline and diesel storage tanks to fuel their trucks and equipment. Then there’s the use of pesticides such as DDT starting in the 1940s and at least through the 1960s when the existing stadium was constructed. The burning of refuse was common practice, resulting in burn pits filled with ash containing heavy metals, carcinogens and dioxins.

Both of the currently proposed plans, Soccer City and the San Diego State University West plan, include extensive park land along the San Diego River.

At least one of the plans, the SDSU plan, envisions lowering the grade in the southern portion of the site and using the soil to raise the grade on the northern half. This provides for greater protections from severe floods in the river valley and generates soil for raising the grade where the Aztec stadium and student housing are proposed.

Both of these ideas are good ones. However, if the soil in the southern half contains significant concentrations of pesticides or other contaminants, then it may result in those contaminants being exposed to the environment including the river and to the public.

There are three major issues with such contaminants that must be addressed: 1) Do they pose a health risk to humans at the property; 2) Do they pose a risk to the environment; 3) Proper handling, management, and disposal of contaminated soil and/or groundwater.

Human health risk involves the exposure to potentially toxic contaminant and duration of exposure. While the petroleum plume from the tank farm has been largely remediated, the potential risk from residual contaminants in the groundwater and potentially from residual vapors in the soil still exists. Based on publicly available records, it appears that soil vapor studies for health risk have yet to be undertaken at the site.

Regardless of the results of such studies, engineering controls are available to protect users of the site. However, with regard the soil contaminants, whether they are pesticides, metals, burn ash by-products or something else, the reuse of that soil will need careful consideration if it is to be used close to the ground surface for open space, parks and greenways so that the public and maintenance workers are not exposed.

The creation of open space and parks within the flood zone means the potential for these contaminants to be present. The location of any soil re-use relative to the river will be important. Once the soil is no longer capped by the parking lot, rain and irrigation can mobilize any contaminants toward the river.

Handling of the Soil

It’s been said that the SDSU plan will keep all the excavated soil on the site, which is a smart way to save money. However, if significant concentrations of contaminants are widespread from the historical land uses, management of how the soil is handled and where it is reused will be important.

Soil with concentrations of contaminants above certain levels will not be allowed for use as fill soil and will require appropriate disposal off-site. Due to the petroleum plume, if dewatering is required for any part of the project, the groundwater extracted will likely require treatment prior to discharge.

A site-wide evaluation of these issues with potential contaminants and how it all fits in with the proposed grading and construction plans should be undertaken. This is the approach that was successfully implemented when I managed the assessment and remediation of the 19 city blocks of the Petco Park and East Village redevelopment project.

Everyone plans for the obvious issues; the trick is to understand the hidden ones and how to best handle the unknowns. Too many times developers choose to limit the effort they put into the assessments up-front.

On projects of this scale, that can have a disastrous outcome to the projects budget and schedule. With a solid assessment and plan, remediation costs can be minimized and schedules can be protected.