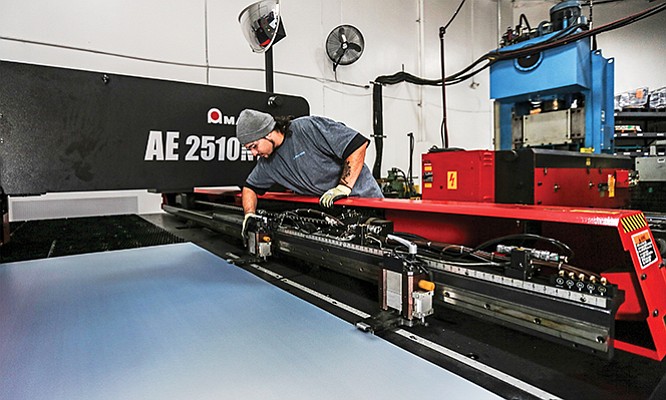 Employee Angel Acosta works a machine at the Solatube headquarters in Vista. Solatube is a manufacturer and marketer of tubular lighting. Photo by Jamie Scott Lytle.

The benefits to natural light exposure are multifold. Not only is it cost-effective and leaves less of a carbon footprint thanks to its sustainability aspect, according to an August 2017 Time.com article, the lack of natural light exposure can lower a person’s serotonin levels, causing depression in the fall and winter months in people with seasonal affective disorder. The disorder, also called the “winter blues,” is the “lethargy and feelings of sadness and hopelessness that come when the weather forces people to spend more time indoors and the season provides little opportunity for exposure to natural light,” according to the report. Less exposure to sunlight can also decrease a person’s melatonin levels and circadian rhythm, causing one to become sleep deprived and, as a result, grumpy.

In the work environment, natural light has additional perks. According to research released January 2018 from Cornell University, optimal amount of daylight reduces eyestrain, headaches and blurred vision of office workers by 84 percent. “The study found that optimizing the amount of natural light in an office significantly improves health and wellness among workers, leading to gains in productivity,” said Professor Alan Hedge. “As companies increasingly look to empower their employees to work better and be healthier, it is clear that placing them in office spaces with optimal natural light should be one of their first considerations.”

Westfall told the San Diego Business Journal in 2014 that a “warehouse could potentially reduce energy consumption by 60 percent by using the SkyVault lights instead of traditional lighting.” The SkyVault is the lighting system that became available in 2003 and is capable of lighting larger commercial spaces.

While his team of inventors is always working to create the next best thing in lighting and ventilation, Westfall says, he hasn’t committed to anything just yet. “We have a division called Pario, which means to ‘bring forth’ in Latin,” he said, “and they are always working on futuristic stuff. But, that is on the hush-hush.”