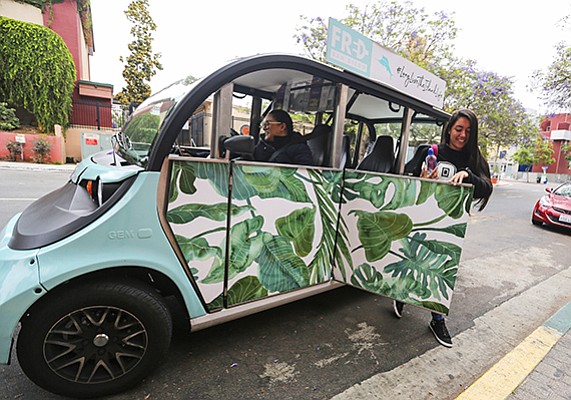 Amanda Santos disembarks from FRED, a free transportation service around the downtown area. The driver is Aby Ortega. Photo by Jamie Scott Lytle.

San Diego — FRED, the shuttle service that provides free rides around downtown, hasn’t seen any impacts to its ridership since the rise of the “dockless” bikes (bikes that can be picked up and dropped off just about anywhere a rider wants) and e-scooters in the area since earlier this year.

The service, which averaged approximately 12,500 riders over the past six months, had 14,000 people going along for the free electric shuttle ride in April.

In 2016, Civic San Diego partnered with The Free Ride Inc., the Hamptons-based company that launched in 2011. The company provides free shuttle services in several other cities, including Southampton, New York, Venice, Santa Monica and others.

According to Verdugo, 250,000 riders have used FRED since its launch in San Diego, and has traveled approximately 400,000 miles with its fleet of 17 vehicles currently in operation. Verdugo said the service will add three more vehicles to its fleet by next month, and in fiscal year 2019, an additional five.

The partnership for the free ride service is in the middle of a five-year contract worth $5.7 million. The contract is slated to end in 2021, but Civic San Diego has options to extend it, Verdugo explained.

“Although the initial term was for five years, we want to see this as an ongoing contract that’s going to get renewed for the long-term,” he said.

The Free Ride earns its revenues in San Diego from its partnership with Civic San Diego, advertising and sponsorships.

Alex Esposito, co-founder of The Free Ride, said the company hasn’t seen a decrease in ridership as the ridesharing bikes and scooters have come online.

“We saw the highest ridership ever in March, and then we were higher in April,” he said. “Obviously this is the same time that the dockless bike share started, but at the same time, we’re also going through some enhancements of our own. We’ve seen zero impact...but I think the rise (in FRED ridership) is more due to some of the enhancements we made on our side.”

Some of the changes include the company switching its vehicles from using standard car batteries to lithium-ion batteries, which enable the cars to increase drive time on the road, as well as improvements to the service’s app.

FRED, which is app-based, is an on-demand service, similar in nature to Uber or Lyft — only you don’t have to pay for it, Verdugo explained. “It’ll pick you up wherever you want, and its footprint is the entire downtown footprint,” he said.

Angela Wells, director of communications with Downtown San Diego, a nonprofit organization to advance business in the region, explained the initial idea was to give the community another transit option based more on a traditional, fixed route, bus stop-style approach.

But given the scope of downtown’s 275 blocks, she said it wasn’t seen as the best option.

After learning about The Free Ride, light bulbs went off.

“With how comfortable people are using Uber and Lyft from their phones, people would naturally be inclined to use this (FRED), and take them from point-to-point, rather than drop them off somewhere and having them walk eight or nine blocks to where they needed to go,” she said.

Earlier this year, dockless bikes and e-scooters were unleashed onto downtown.

The company, in a letter to the city, said over a three month period in March, its bikes (pedal powered, electric assisted and its electric scooters) provided 21,000 riders a way to get around the city.

Despite some controversy about the bikes and scooters being left in nearly every nook and cranny around downtown, Verdugo said it’s good to have mobility options for downtown.

“(It’s) something that’s been lacking for the past few years,” he added.

Verdugo said people can utilize the dockless bikes, or use FRED. “The choice is yours: pay a fair rate to rent a bike or scooter or take a free shuttle ride.”

As for the controversy, Verdugo said it’s partly due to the riders getting used to the dockless system.

“People are just parking these bikes and scooters on the sidewalks, laying them down,” he said. “I think that as the riders continue to get educated about how to use it, I think that the problem will hopefully go away.”

Wells agreed, saying Downtown San Diego is a fan of the fully electric vehicles, whether it’s FRED or the dockless bikes or scooters, because it helps lead to zero emissions, which in turn, helps the city’s Climate Action Plan goals.

“We certainly think that they can co-exist downtown with a bunch of varieties of transit,” she said.

FRED began with the idea the service wasn’t solely for tourists to use, but also for the people that live and work downtown.

Over 90 percent of FRED’s ridership are people that live and work in downtown, according to Verdugo.

Wells is excited at the opportunities for transportation methods to grow as the downtown district does.

“With all of the new businesses, and all of the new housing that’s coming online in the next few years downtown, we’re excited to see an increase in the different types of transit, and the options that people have to pick the right form of transportation that’s good for you and for each person downtown and their individual needs,” Wells said.

Verdugo said Civic San Diego would love to expand the service into Balboa Park and Uptown. It’s a goal, he explained, but isn’t sure when or if that might happen.

As for Esposito, he, too, is hoping to continue to grow FRED’s service in San Diego.

“The more sponsors we can get, and the more we can continue to form partnerships like we have with Civic (San Diego), the more free rides we can give and the more gas we can prevent people from burning in their own cars,” Esposito said.