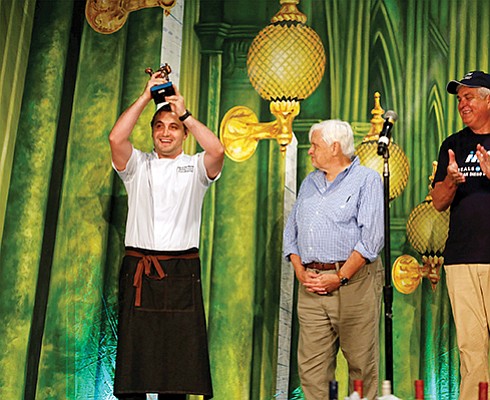 San Diego — Meals on Wheels San Diego County recently held its “Over the Rainbow” Ball & 9th Annual Chef Appetizer Challenge at the Sheraton Harbor Island. This year’s event raised $235,000. It’s the largest annual fundraiser to raise critical funds to support the independence and well-being of more than 3,400 seniors in San Diego County. Included in the festivities was the annual “Chefy Award” pitting some of San Diego’s finest restaurants and chefs against each other to see who would reign supreme for the best appetizer. Chef Jeremy Loomis from Top of the Market won the coveted Chefy Award for 2018.

Tonya Torosian, CEO of Promises2Kids said the scholarship program offers the consistency necessary for youth to reach their educational goals placing them on the path to self-sufficiency for years to come.”

Torosian said at current funding levels, the program is limited to how many youth it can serve and that it can only accept half of the applicants that apply. Visit promises2kids.org.

Cortés was also honored at San Diego Pride’s Spirit of Stonewall Rally recently at the Hillcrest Pride Flag as one of six awardees who contribute significantly to the LGBTQIA+ community through their leadership, activities, and fundraising efforts.

In addition, Cortés has been chosen as a 2018 honoree for the California Legislative Lesbian, Gay, Bisexual, and Transgender (LGBT) Caucus. In June, he was presented with a resolution in commemoration of his accomplishments and contributions to the LGBT Community at the LGBT Pride Ceremony in Sacramento at the state Capitol.

During the years, Cortés has served on many nonprofit boards of directors, including McAlister Institute, Being Alive San Diego, and the San Diego Men’s Chorus. For the last six years, he has been a peer mentor to nonprofit leaders through the Fieldstone Leadership Network. Visit mamaskitchen.org.

With wildfire season turning into a year-round threat throughout the state of California, San Diego Gas & Electric recently awarded nearly $1 million in shareholder-funded charitable grants to 95 emergency response teams and other nonprofit organizations that have made it their mission to protect the region from wildfire.

Known as the SAFE San Diego Awards, this philanthropic initiative has earmarked shareholder dollars to ensure local Fire Safe Councils and Community Emergency Response Teams have the tools, resources, and staffing they need to plan, prepare, and respond to emergencies in every neighborhood and community in the region.

Volunteers and teams awarded grants from SDG&E represent organizations that play critical roles in helping to prepare our communities for emergencies and are often the first line of information and support in a crisis. Visit SDGEnews.com.