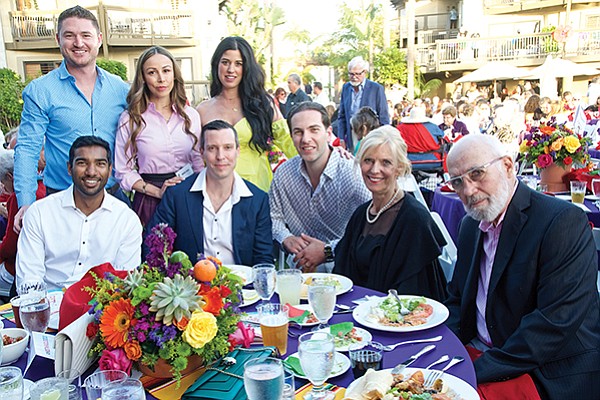 A record-breaking 460 people attended the Mariachi Festival, which raised nearly $300,000 for the Mercy Outreach Surgical Team (M.O.S.T.), a group of physicians, nurses, and volunteers who donate their time and expertise to provide life-changing surgeries to children in need throughout Mexico.

Since 1987, M.O.S.T. volunteers have provided free corrective medical care to children who have burn scars and birth defects. The M.O.S.T. team travels to small towns throughout Mexico to repair cleft lips and palates, treat burn scars, remove extra toes and fingers, repair hernias and correct the vision of children with crossed eyes. Each mission is 100 percent funded through donations. Committed volunteers, who pay their own travel expenses and give-up valued vacation time, go on these missions to help transform lives. Visit Scripps.org/mercymost.

Maritime Museum of San Diego, home to one of the world’s finest collections of historic vessels, from sail to steam to submarine, announced the first stage of its 2018 curriculum to train individuals 18 and over how to sail and maintain tall ships. Vessel training includes learning the skill to sail the 19th century Star of India, the world’s oldest active sailing tall ship, plus Californian, the official tall ship for the state and the recently built 16th century Spanish galleon replica San Salvador.

Classes are limited to 300 participants, free and require museum membership. Successful graduates will transfer their skills on the water when the fleet puts to sea with the Star of India’s anniversary sail event in November. Visit sdmaritime.org

The event, held each April in recognition of National Child Abuse Prevention Month, raised funds for the organization’s programs that provide critical assistance to children and families throughout San Diego County.

Home Start’s mission is to assure the safety and resiliency of children by strengthening families and their communities.

Bank of America announced $532,500 in grants to more than 40 nonprofits that help address the needs of those at risk for or experiencing homelessness across San Diego. The grants focus on increasing access to shelter and wraparound supportive services, in addition to job skills, education and other basic needs that are fundamental to establishing financial stability.

San Diego has the fourth largest homeless population in the United States according to the U.S. Department of Housing and Urban Development. More than 9,100 people are homeless, a 5 percent increase from the previous year. In a recent Kiplinger Report, San Diego is the 10th most expensive city in the U. S. with cost of living 46.1 percent above the national average and 138 percent higher housing costs. In addition, 15.6 percent of all city of San Diego residents (212,994) live below the federal poverty threshold.

Rick Bregman, San Diego Market president for Bank of America said: “So many people are just one life event away from being homeless or needing to depend on basic needs services such as food banks or shelters. But through strategic philanthropic investments into San Diego’s incredible nonprofit network addressing fundamental services like hunger relief, shelter and education, Bank of America can deploy capital to advance more economic opportunities in the region.” Last year, Bank of America volunteers logged nearly 18,000 volunteer hours in the San Diego market. Visit about.bankofamerica.com.