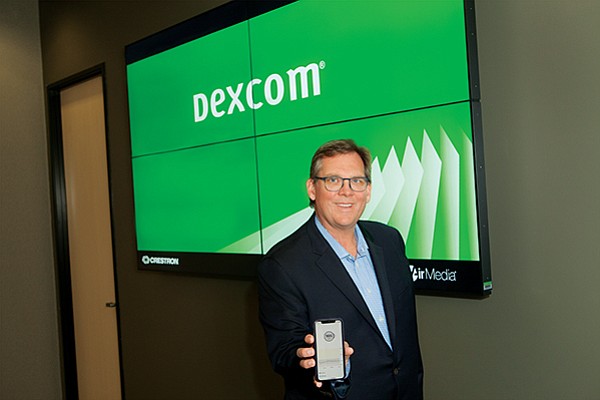 Pictured in this file photo is Kevin Sayer, the CEO of San Diego’s Dexcom, a maker of diabetes monitoring technology that’s building out its data team. Medical device companies like Dexcom are hiring tech talent in greater numbers. Photo by Melissa Jacobs.

The life sciences and technology industries are melding together, with San Diego firms like Illumina and Dexcom chasing after programmers in fields associated with Silicon Valley: deep learning, artificial intelligence and big data.

This convergence, highlighted in Biocom Institute and California Life Sciences Institute’s recent report, “Talent Integration: California Workforce Trends in the Life Science Industry,” jives with what other San Diego experts are saying. Genomics, medical device and biotech companies have a high demand for computing powers as they blaze new ground, whether it be making sense of voluminous data sets or leveraging machine learning to identify drug candidates. 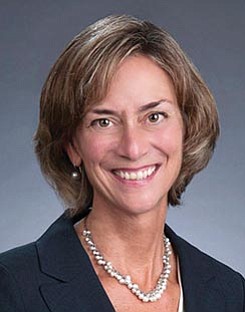 Toft said regional scouting involves concentric circles, often moving outside San Diego, to find ideal candidates, who are almost never unemployed but can pull in two or three offers without trying too hard.

Life sciences firms must compete for talent with growing Silicon Valley tech firms willing to pay top dollar. As a differentiator, life sciences companies highlight missions that could lead to health breakthroughs, most likely to resonate with millennials wanting more than a paycheck, according to Toft.

“It’s emphasized that this is meaningful work,” she said. Toft added life science firms are typically more diverse than tech, a recruitment tool that begets further diversity, linked to innovation.

These firms also sweeten employment offers with the ability to work virtually, even from another city like San Francisco. Companies too may emphasize organizational structures potentially allowing greater room for advancement.

Tech folks are usually best suited to slice and dice gargantuan amounts of data generated by life sciences firms, which is only increasing.

She also saw the convergence in her previous gig, as a bioinformatics scientist at Human Longevity, a genomics company with the goal of helping people live longer and healthier lives.

Academia shares a demand for these employees, as evidenced by Sanford Burnham Prebys, which specializes in developing treatments for cancer, neuroscience and other areas.

Long said she looks for employees who hold degrees in fields like physics and mathematics, who also possess experience in biology, or vice versa — candidates with science degrees that worked in tech. She said universities are crafting programs covering both worlds, which has yet to make a dent in employer demand.

“It’s growing but not meeting demand yet,” Long said.

Tech Talent Hard to Get

It’s tougher for life sciences companies to lure tech talent than the other way around, interviewees agreed.

Life sciences companies can have long development timelines, as well as little tolerance for error, a contrast to the “move fast and break things” motto of tech.

Bozinovic said the industry is trying to do a better job showcasing the good it’s doing — and to break down an awareness gap, With tech at the forefront of the public’s consciousness, many may not even think about life sciences as an option.

Initial efforts to raise the field’s profile centered on college students. But increasingly, companies like Illumina, Janssen and Vertex travel to high schools for hands-on introductions and career path talks.

“They’re understanding more and more the need to get to students earlier,” said Bozinovic.

In San Diego, medical device companies have an especially strong need for tech staffing, given that they increasingly convert geeky hardware into consumer-friendly electronics, Bozinovic said.

She cited Dexcom, a maker of diabetes monitoring equipment, building out its data team.

In late March, Dexcom won U.S. Food and Drug Administration approval for a G6 sensor, which is worn on the abdomen and contains a small sensor that continuously measures glucose, sending real-time readings to a smartphone.

As another example, ResMed produces cloud-connected breathing devices, having embraced software and data a few years ago.

“When you think about a pacemaker, an insulin monitor, they’re capturing data as well. Over time, companies are figuring out to how to mine that data to identify trends and help improve clinical outcomes,” Bozinovic said.

But this turn toward tech also creates challenges — think cybersecurity or hacking, which could mean life or death with devices, according to the report. This makes it all the more important to bring in tech wizards.

Clinical trials, ripe for speeding up with data, mark another big area where this trend is occurring, Bozinovic said.

The convergence is creating jobs and marketplaces that didn’t exist a few years ago.

That’s true as well of big tech companies like Google and Apple, which have launched health-focused arms.

A goal of the report is to put this trend on the radar of universities and high schools so they tailor offerings accordingly, said Lindburg. Some have already taken notice: Departments with specialties in life sciences and tech increasingly collaborate on projects.

The report notes other employment trends, such as new technologies like gene editing and t-cell therapy reshuffling skills needs.