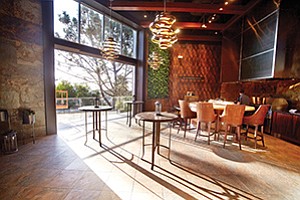 The interior of Pirch’s UTC Westfield store and some of the products it sells. Photo courtesy of Pirch

San Diego — An overly ambitious rush to expand, confusion over its brand, and costly real estate deals were what caused Pirch — the high-end household furnishings and fixtures company — to close all but its four California showrooms.

“I think we just got a little bit ahead of ourselves,” said Clint Fenn, Pirch vice president of sales.

Once hailed a standout success in a retail world where many companies that had been household names for decades were foundering, Pirch was forced to retrench in late 2017 and is in the process of reshaping itself.

The company was founded in 2009, with its flagship showroom in San Diego’s UTC Westfield mall — growing to 10 stores by 2017.

Within months of opening a showroom in Austin, Texas, the company shut it down, along with showrooms in New York City, Atlanta, Chicago, Dallas and Paramus, New Jersey.

About 200 people were laid off and the company’s leadership was changed, Fenn said.

“The decision was made in November to go back to our profitable stores in California,” Fenn said.

Part of the problem was that Pirch misread the markets outside of California, thinking it could duplicate its success in California by simply opening copycat stores elsewhere.

“We just thought that all markets were the same,” Fenn said. “We just put a Pirch up without any differentiation.”

The result — its marketing fell flat in places such as New York City.

The products that sold well in California, where high-end homes tend to be sprawling with an emphasis on outdoor living, bombed in New York, where space is at more of a premium.

For instance, Fenn said decorative vessel sinks, which look like a bowl on top of a counter, were big sellers in California but few wanted them in New York, where customers didn’t have room for them.

“Out here, they’re great,” Fenn said. “In New York, it’s more functionality than it is appearance.”

Then there was the problem of people not knowing what Pirch was.

That got the company name out there, but it didn’t tell people what they could buy at Pirch.

“We need to view ourselves as a house of brands,” Fenn said.