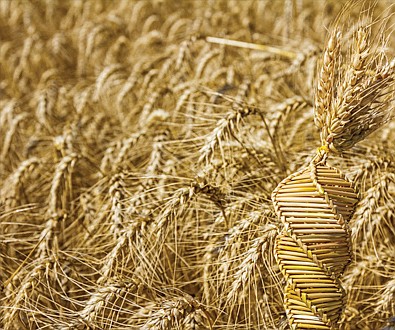 Decades ago on North County farms, the Ecke family turned the poinsettia into a top-selling Christmas plant. From former Ecke land, Cibus again wants to put the region on the map.

The company — which recently filed for a $100 million initial public offering — employs gene editing to boost crop yields and hardiness. Cibus and other San Diego companies are at the forefront of agriculture biotech, or “agbio,” a space adding a new chapter to the county’s storied agricultural past.

“Everything that we need is here,” said Cibus CEO Peter Beetham, ticking off the reasons.

At the top of his list: heaps of talent in genomics, microbiology and plant cultures, coupled with older-school knowledge in areas like greenhouse management.

Speaking of which, the Sorrento Valley-based company leases greenhouses in several parts of North County. That includes from the Leichtag Foundation, an Encinitas nonprofit that bought the last chunk of local Ecke flower operations.

The Eckes’ marketing — including donating the plants to the talk show “The Tonight Show” in the 1950s — and revolutionary breeding methods popularized poinsettias.

Like the Eckes, Cibus wants to push plant breeding forward.

Its gene editing approach selects desirable traits in a way that mimics nature, free from the label of genetically modified organisms, or GMOs. GMOs — which incorporate DNA from other species — fall under burdensome regulations.

Cibus soon will launch three canola hybrids, among other products, and plans to license crop traits to leading seed companies.

“If you’re in upstate New York where I started my career, that’s not so easy,” Beetham said.

Cibus uses sequencing chemistry from San Diego’s Illumina, a mainstay of the industry.

Much ink has been spilled over Ilumina tools powering genetic services like Ancestry.com and clinical tests. Lesser known: researchers and farmers roundly turn to company technology for healthier dairy cows. And sweeter milk. And hardier crops.

Central to Illumina’s agriculture technology is array genotyping, which examines specific parts of DNA, rather than an entire genome.

In a notable example, Illumina teamed up with the nonprofit Irish Cattle Breeding Federation to improve the genetic breeding of livestock in a program that started in 2015 and ends in two years.

Instead of the traditional method of eyeballing desirable traits, the program looks to provide quicker and more accurate breeding data.

The goal is to genotype more than two million animals over the project, in the hopes of sparking routine livestock genotyping.

Speeding Up the Process

“Artificial selection selects for a trait. All that genomics does is speed up the process. So we’re using the natural diversity that’s already there, and saying we can shorten the generation time,” he said.

Illumina — which posted 2017 revenue of $2.75 billion — doesn’t break down sales by segments. But the company’s agriculture operations have grown over the last decade.

That’s according to Cindy Lawley, a consultant with the firm GinkgoFish LLC and former Illumina employee. Success in dairy bovines prompted entry into other submarkets, like pig and sheep breeding, wheat, soy and fruits.

“llumina was uniquely positioned to have that pipeline of both sequencing and genotyping,” Lawley said.

She added the company made inroads with key opinion leaders at the United States Department of Agriculture, and equivalent agencies in other countries, and built out sales teams that speak agriculture.

Illumina undoubtedly counts as a boon for local agbio. But unlike, say, North Carolina, San Diego lacks a cluster of agbio giants in its backyard.

“San Diego is not a location where people coming from Monsanto, Bayer, Syngenta, etc. mergers would naturally land,” Lawley said, noting consolidation swept over the industry.

“Those people along with retiring professors from universities in the Midwest and retiring USDA scientists represent human capital creating those agbio startup companies.”

On the flipside, the region’s strengths, she said, stem from an entrepreneurial environment and the venture capital scene.

On that note, Finistere Ventures, an agtech venture firm, calls San Diego home, with offices in Palo Alto and Dublin, Ireland, as well. A recent report from the firm states global agtech investment from January to October hit $1.6 billion, on pace to surpass a record year in 2017.

That has been driven, per the report, by everything from rapid investment in plant-based meat substitutes to more late-stage financing rounds. Cibus, for instance, took in a $70 million Series C round ahead of its IPO filing.

San Diego cemented a place in agbio history through companies like Mycogen, which in the 1990s patented some of the first genetically modified plants. Dow Chemical Co. acquired Mycogen in 1998, among a number San Diego agbios uprooted.

“Just like in the drug industry in San Diego, there’s been consolidation and acquisition,” said Joe Panetta, the CEO of San Diego life sciences trade group Biocom, and who once worked for Mycogen.

“But I think we still have a great base of agricultural biotechnology here.”

As testament to the area’s reputation in agbio, the International Plant & Animal Genome conference will take place Jan. 12-16 in San Diego. Such regard has drawn outside companies to establish a footprint here, too.

NRGene — an Israeli startup that deploys big data and genomics for plant breeding — will soon open an office in San Diego. The company has partnered with the likes of Illumina.

(In a high-profile example, NRGene, Illumina and others — in collaboration with SeaWorld — recently sequenced a bottlenose dolphin genome, with one aim being conservation planning.)

“It’s about being close to our customers, to our partners,” said Nitay Gold, NRGene’s general manager of North America.

SEE MORE: Farming Problems Get Tech Solutions as Cos. See an Open Field