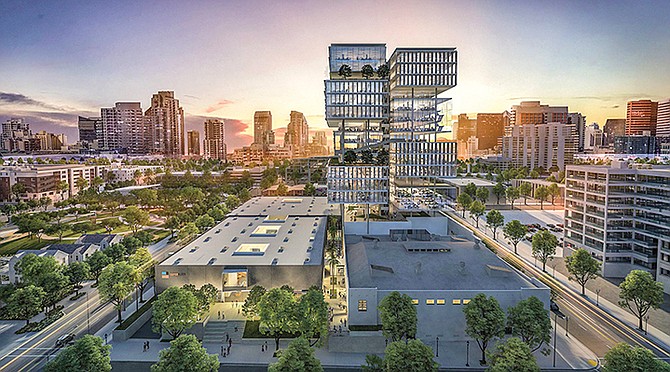 A 17-story tower is part of a redevelopment project on the East Village site that once housed Jerome’s Furniture. Rendering courtesy of Navarra Properties 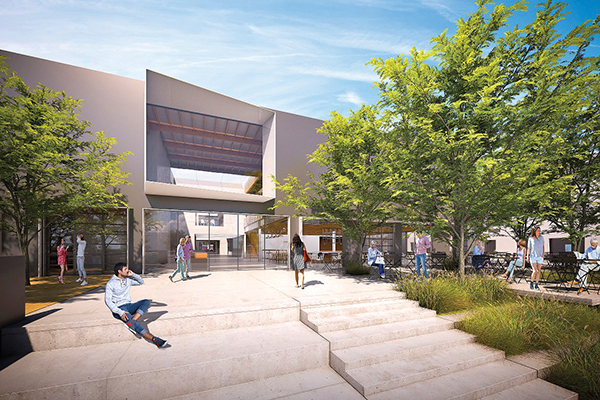 The entrance to two former warehouses once used by Jerome’s Furniture would be redone as part of a redevelopment project. Rendering courtesy of Navarra Properties 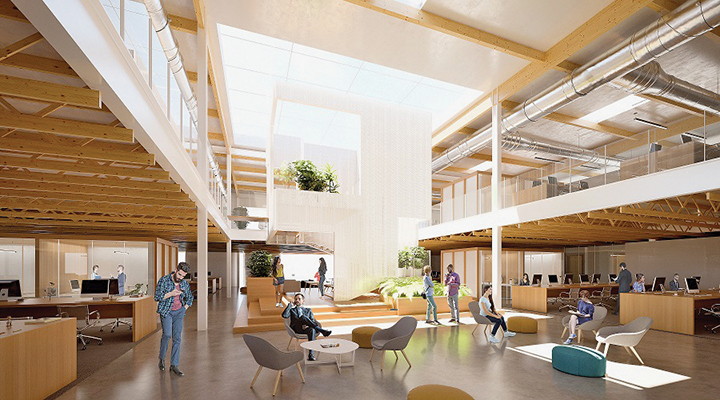 Rendering shows how the interior of two former warehouses might be transformed into creative office space. Rendering courtesy of Navarra Properties

The former home of Jerome’s Furniture — an East Village landmark in downtown San Diego for nearly 50 years — will be transformed into a new landmark of sorts.

Plans by the Navarra family, owners of Jerome’s, are to redevelop two warehouses, which were part of the furniture store, into creative office space followed by construction of a 17-story office tower next to the warehouses with above-ground gardens sandwiched between several of the floors.

Renovation of the former warehouses is estimated to cost $25 million. Construction costs of the tower were not disclosed.

“As with other cities, you have this growth of people who are living in the downtown area. That really creates a talent pool,” said Mark Navarra, president of Navarra Properties. “We see this as an opportunity for employers to come in and access that talent pool.”

Navarra Properties is a real estate investment and management company created by the Navarra family, which at one time owned a huge swath of East Village.

Bounded by E, F, 14th and 15th streets, the office project has been dubbed SuperBlock@I.D.E.A District.

The project is called “SuperBlock” because the land it covers is the size of two normal city blocks. The I.D.E.A District is a 35-block arts and innovation section of downtown conceived by developers David Malmuth and Pete Garcia.

“Our block is one of the only superblocks that is available for development,” Navarra said.

Malmuth and the Los Angeles-based Lowe, formerly known as Lowe Enterprises, will manage the property in a joint venture.

“We think it’s the first large scale repurposing of a downtown warehouse in office space in downtown San Diego,” Malmuth said. “We’re aiming to find a large tenant that wants a very cool space in a burgeoning neighborhood.”

The site has a rich history as the birthplace of Jerome’s Furniture, which has grown to have showrooms in multiple locations.

Jerome’s Furniture dates back to 1954, when Jim Navarra and his two partners started Strep’s Warehouse.

Jim Navarra became the sole owner in 1960 and changed the name to Jerome’s in 1968, naming the business after his son, Jerome.

The company moved its main San Diego showroom to West Morena Boulevard in 2000.

With a flurry of new construction in East Village from apartment towers to UC San Diego Urban Campus, Navarra said the time was right to redevelop the SuperBlock.

The site is across the street from the planned East Village Green, a 4.1 acre park that would include two dog parks, a children’s garden, community center, performance stage, fountain and underground parking.

Construction on the park is slated to start next year.

The warehouses are on the same block as the former Colesium Athletic Club that was renovated to become Punch Bowl Social — a restaurant and entertainment center at 1485 E St.

Until recently, one of the warehouses was used by the San Diego Derby Dolls, a roller derby team.

Combined, the two warehouses will have 100,000 square feet of rentable space on two floors with 114 parking spaces.

“Basically, we’re keeping the existing bones of the building, and that’s what makes it cool,” Malmuth said. “When people see the space, they love it. It is unique and has a very special history to it.”

Malmuth described the renovation as “a light once-over.”

“We’re trying to be careful with the renovation. We really want to keep the historical character,” said Matthew Porreca, principal of BNIM architects which is the designer on the project. “We don’t want to lose the warehouse. It has some authenticity to it, some history of how this neighborhood really functioned. We really want to keep the whole essence of that alive.”

The structure will still look like a warehouse, but with the addition of new windows that will be punched out of the walls and four nearly 1,000 square-foot skylights to bring in natural light.

“We’re trying to organize the interior space around these big pools of light,” Porreca said.

Construction on the warehouse portion of the project could begin as soon as tenants commit to leasing the space.

“Because we’re converting existing buildings, we can convert it and deliver it to the tenant in about a year from commitment,” Navarra said. “We think we’re going to attract some real interest in the next six months.”

Still, Navarra said there isn’t the pressure some developers may feel to build quickly.

“Our family has owned this property for decades,” he said. “We have the ability to be patient. We’re not under a hard timeline like many developers who are buying a property and building it speculatively. We’ve been really focused on trying to build a neighborhood in the upper East Village.”

Plans for Office Tower Are Conceptual

Plans for the office tower that will be on the site of the original furniture store are conceptual at this point and could change, depending on the needs of whomever leases the space.

In designing the tower, BNIM used the high-tech campuses of Silicon Valley as its inspiration.

Typically, the campuses are three to four-story buildings in a shared location.

“We started thinking, ‘how do we pull that into an urban environment,’” Porreca said.

What they came up with was taking a spread-out suburban campus and “stacking it up into what we call an urban vertical campus,” he said.

The result is a sandwich-like look with outdoor garden decks every few floors, some of which have trails cutting through them, outdoor café space and outdoor meeting rooms.

Derek Hulse, who’s handling leasing of the project as managing director of Cushman & Wakefield in San Diego, said the SuperBlock is a good fit for East Village, which has distinct personality as a more funky, artsy part of the city.

With an office vacancy rate running at about 11 percent, Hulse said Superblock should have strong appeal.

“What we know from our experience is that the current tenant is interested in unique office spaces, differentiated office spaces,” Hulse said. “A traditional high rise fits a particular tenant industry but there’s an emerging tenant base that is looking for something a little different and currently, there’s not a lot of offerings in the market.”

As Navarra sees it, superblock is likely to be one of the last big developments in East Village.

“There are just fewer and fewer developable parcels left,” Navarra said. “What you’re seeing is the secondary and tertiary parts of the development.”