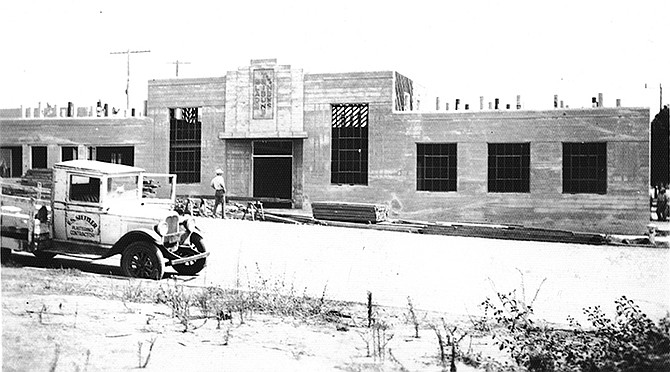 The Blade-Tribune building under construction circa 1936. Photo courtesy of the Oceanside Historical Society 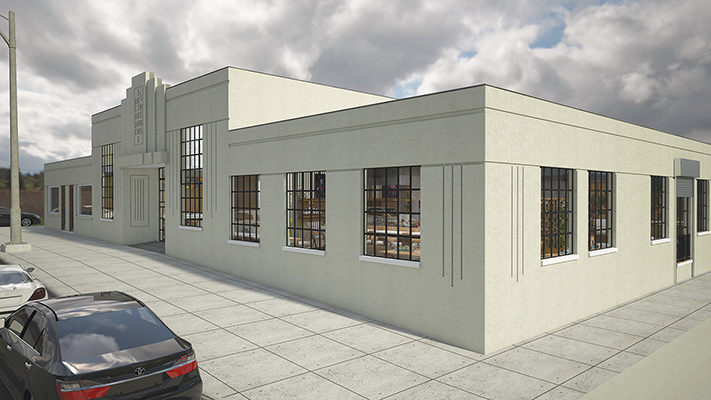 Rendering shows what the Blade-Tribune building will look like when reincarnated as an Italian restaurant that will be named Blade 1936, in homage to its past. Rendering courtesy of Donia Ackad

San Diego — When Donia Ackad bought a former used furniture store in downtown Oceanside in December, she had no idea what was beneath the patchy stucco that covered the exterior.

“It was horrible, the condition was so bad,” said Ackad, who is president and senior escrow officer at San Dieguito Escrow Inc.

She thought of building condos on the site, until she learned that what she bought was the former home of the Blade-Tribune newspaper — the last project designed by Irving Gill, the San Diego architect considered a pioneer in modern architecture.

Gill died in October 1936, the year the newspaper offices were built.

“I thought, ‘I have a little piece of history here, why not restore it?,” Ackad said. “I love history.”

The former newspaper building at 401 Seagaze Drive is being brought back to life by Ackad as an Italian restaurant that she is naming Blade 1936 in homage to its past.

It’s one of two Oceanside historical structures getting a new life this year. 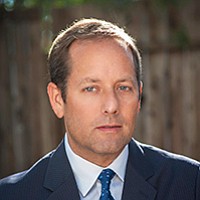 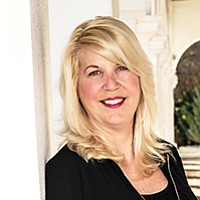 The other is the former Dolphin Hotel, gutted, remodeled and renamed The Fin Boutique Hotel at 133 S. Coast Highway.

As with the once-grand newspaper offices, “The building was really in pretty poor shape,” said Matthew Higgins, the Fin’s general manager.

“Except for the shell, it’s pretty much a new building,” Higgins said. “It’s undergoing a full renovation.”

Opened in 1927, The Fin was built by Julius Keisker, who called it The Keisker Hotel.

It was one of the first hotels in Oceanside and is the only one remaining in the city of that era, said Kristi Hawthorne, president of the Oceanside Historical Society.

Unlike other hotels of the time, The Fin was built to serve travelers taking Highway 101 between San Diego and Los Angeles, Hawthorne said.

When it opened, advertisements touted the hotel’s large rooms with steam heat and sinks with hot and cold water in every room. Bathrooms were down the hall.

Around 1936, the hotel was bought by Robert and Jesse DeWitt and renamed the DeWitt Hotel.

During World War II, it became the regional headquarters of Pacific Telephone Co.

After the war, the building went back to being a hotel, rechristened as the Dolphin.

Over time, the hotel gained a somewhat unsavory reputation, with rooms rented by the week or by the month.

Western Hospitality Group, which operates Holiday Inn and Marriott hotels in Southern California, bought the 11,534 square-foot hotel in May 2016 for $2 million.

The company didn’t disclose the cost of the renovation, but Higgins said extra care was taken to preserve as much of the history as possible while bringing the hotel up to current standards, including installation of an elevator in the two-story building and completely redesigned guest rooms with hardwood floors.

“Yes, there is a bathroom in every room,” Higgins said.

Every room also has a shower, coffee maker, air conditioning, and a big screen television — “everything you’d expect from a modern hotel.”

The original tile floor at the lobby entrance was retained, and a decorative wooden staircase leading to the second floor was reconstructed piece-by-piece using the original wood.

“The staircase was in pretty bad shape,” Higgins said.

A small lounge off the lobby has large murals showing the Oceanside Pier and a map of the city, a shuffle board game, and a big screen television.

The color scheme was changed to orange and gray, to give the hotel “a beach feel.”

To make room for the improvements, the hotel dropped from 28 rooms to 27.

The name change from the Dolphin to The Fin was meant to pay homage to the Dolphin’s past while indicating a new beginning, Higgins said.

“I love, love what they’ve done with it,” said Hawthorne of the Historical Society. “The fact that they would incorporate the fin, if you will, from the Dolphin is keeping the history but hits a new chapter.”

The renovated hotel opened for guests Memorial Day weekend, although work is continuing on retail space that’s on the first floor.

Daily rates range from $129 to $199 for rooms with a single king-size bed and for a bungalow to the rear of the main building and $149 to $200 for rooms with two queen-size beds.

Renovation of the Blade-Tribune building is expected to be finished in by September or October, and is proving to be especially challenging because the structure had fallen into such disrepair, lacked a sprinkler system and had outdated plumbing.

Inside, Ackad plans to display historical photographs of Oceanside and is searching for a printing press she can install as a conversation piece.

The restaurant will take up about 6,000 square feet of the 11,043 square-foot building and Ackad said she hopes to use the additional space for a holistic medical center, similar to one she owns in Encinitas.

Hawthorne said restoration of the Blade-Tribune building “changes the whole landscape for a block.”

As part of the restoration, Ackad removed the stucco that had been covering the building to reveal the name of the former newspaper carved in stone above the front door.

The building is especially significant in Oceanside’s history because it was a milestone for the city to gain its own newspaper.

“It just spoke to the prosperity in Oceanside,” Hawthorne said. “It had a significant impact on downtown Oceanside.”

President Franklin Roosevelt even sent the publishers a telegram congratulating them.

“Things are easy to tear down, and I think some things need to be torn down, but these older buildings are worth saving,” Hawthorne said. “They add such great character and flavor to downtown.”