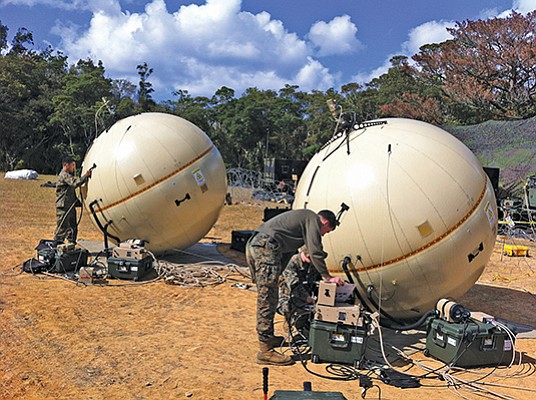 U.S. Marines tend to a pair of satellite dishes made by GATR Technologies, a Cubic Corp. subsidiary. The U.S. Army has just ordered more than $500 million in GATR dishes as well as spares and training. Photo courtesy of Cubic Corp.

The U.S. Army awarded the Cubic Corp. subsidiary a $522.5 million contract modification for its specialty product, inflatable satellite antenna systems. GATR builds a satellite dish that inflates like a beach ball and collapses for transport. The deal, announced Aug. 10, calls for antenna systems of several sizes, as well as spares and training. Work will continue through September 2023.

GATR manufactures dishes that are 4 feet, 6 feet, 8 feet and 13 feet in diameter. When inflated with a blower, the antenna inside assumes a parabolic shape. The GATR ball can stay inflated if punctured with small-caliber bullet holes.