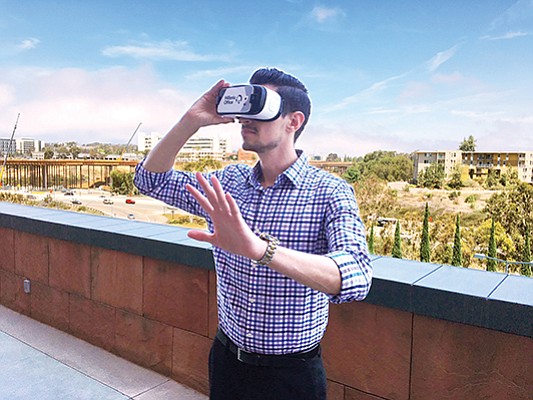 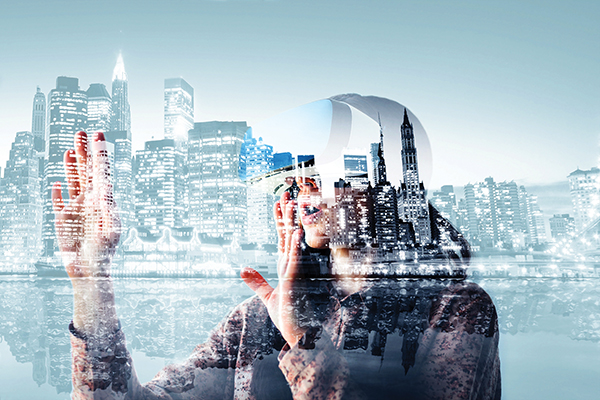 Virtual reality systems create a world where people can see and wander through buildings even if they are in the planning stages. Photo courtesy of JLL

San Diego — Drones that help map buildings and property in a fraction of the time than it used to involve, and virtual reality systems that take people inside buildings still in the planning stages are among the technological innovations that are transforming commercial real estate.

“It’s going to erase all the conventional methods that are going on in real estate right now,” said Pat Fuscoe, founder and CEO of Fuscoe Engineering with offices in San Diego and Irvine.“It’s changing how we do business,” said Fuscoe, who uses drones, a super computer and cameras so sensitive they can photograph the individual grains of sand on a beach.

“That’s the new world for us,” Fuscoe said.

In one instance, Fuscoe said he used a drone with a camera to scan a hotel, feed the information it collected into a computer and produce a 3-D model the same day in what would have taken several days to make using conventional methods.

Contracting companies like San Diego’s SWS Engineering Inc. have latched onto drones over the past few years to model and track projects.

“Most of the larger companies here in San Diego are kind of moving in that direction,” said Deyan Pantich, SWS survey and mapping manager.

Because they fly lower, drones can produce more detailed images than the aerial photography they replace that was shot from higher flying planes, Pantich said.

“There’s a higher degree of accuracy,” he said.

Virtual reality that lets people see buildings where there are none and building interiors with fine detail is becoming so common among commercial real estate brokerages that clients have come to expect it, just as they once expected fancy brochures. 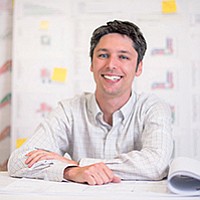 “Nothing sells a potential tenant on a space like being able to imagine themselves in it,” said Ben Regnier, a senior associate in the San Diego offices of Gensler architects, and nothing makes it easier to imagine than seeing the space in a virtual way where people can adjust it to try out various room arrangements and types of furnishings. 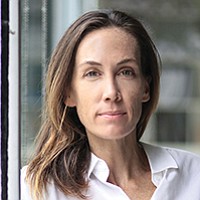 “We use it to get inside our own projects to make sure we really understand the eye level of the project and the scale of space and the way daylight is going to come into a space and the points of view people might have,” Regnier said. “It allows our internal teams to be able to see a product on a more human scale.”

Even those brochures have been affected by technology.

Systems are being developed that allow paper presentations to come to life through apps developed for smartphones, said Keely Colcleugh, founder and CEO of Kilograph, a Los Angeles marketing firm.

“You might open it, point a phone at it, and you get a building coming out of it,” Colcleugh said.

“It’s such a perfect tool for explaining space to people, particularly people who are not professionals,” Colcleugh said. “You can walk through a space, a virtual space, and interact with it. You can change furniture, you can do everything. It’s like nothing we’ve ever seen before. There’s something about the way people understand a space when they’re in it.”

Virtual reality has become an essential tool at commercial brokerages such as JLL and CBRE.

Those brokerages use virtual formats on various platforms, from headsets to tablets to smartphones.

To keep up with the technology, CBRE has acquired firms that specialize in different aspects of developing technology and partnered with others, said Alli Simpson, sales director in the company’s San 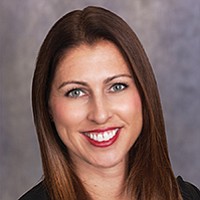 Among other things, through a variety of platforms that the company calls “Vantage Technology,” CBRE allows clients to play with space in virtual reality, creating a variety of office configurations in 3-D models.

“It’s live, it’s in real time,” Simpson said. “You can be anywhere, as long as you have WiFi. You can be on a phone call, sharing a screen, you could interact with it. People can communicate and visualize space without having to be physically in the space.”

Other aspects of its Vantage Technology allow clients to visualize and compare leasing space in a conventional office building with leasing it in a temporary shared working environment, such as WeWork.

“There’s so much data that I think all the technologies are going to be based on creating user-friendly, visual technologies that people can use to make financial decisions,” Simpson said. JLL has similar tools. 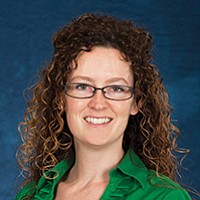 You can take a tenant to dirt, they can hold up an iPad and kind of visualize what it would look like just standing there,” said Jen Olson, senior graphic designer for JLL in San Diego.

One JLL platform allows prospective tenants using virtual reality to turn empty space into an office with work stations, break rooms and amenities and move things around to experiment with a variety of floor plans.

Computer programs have become so sophisticated that they allow the owners of shopping malls to track where their customers are coming from, where they’re going and alert merchants to have pop-up sales when potential customers are near, said Sandy Sigal, president and CEO of NewMark Merrill, a retail landlord which owns or manages 72 shopping centers, including several properties in San Diego.

“I can make sure that my retailers are prepared,” Sigal said, adding that the information is an aggregate and no personal information is collected on individual customers.

His company also collects reviews from social websites to find out why a particular business may be failing and makes adjustments.

Still being refined are augmented reality systems that take virtually reality an extra step so people can see an imaginary structure in the context of what’s really there.

For instance, where virtual reality would allow someone to see all the details in the made-up room they’re in, augmented reality would take them outside the room to see what’s really there now.

“You could take a (computer) tablet to an empty building site, you could just see what the tower would look like in its context, pan around, and there it is, with all the traffic,” Colcleugh said.

The “Pokémon go” video game released in 2016 was an example of augmented reality using smart phones in which Pokémon characters would appear superimposed in a park or in some other real space.

“We’re not doing AI yet here locally in San Diego, but that is something that we’re looking into,” said Olson of JLL.

Regnier of Gensler said artificial intelligence will allow designers to “query the environment of the building and understand not only what it’s going to look like but how it’s going to perform, how much energy it’s going to use.”

Looking further ahead, Olson said advances in 3-D printing are likely to bring changes that are hardly imaginable.

“The possibilities are crazy,” Olson said. “A lot of the technology that’s out there now, you wouldn’t think is existing, but it is.”