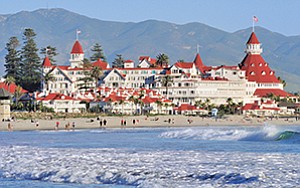 Six months after its planned sale to a Chinese insurance company was called off, the iconic Hotel del Coronado remains in the portfolio of Blackstone Group. Photo courtesy of CoStar Group

San Diego — Six months after its planned sale of Hotel del Coronado to a Chinese insurance company was apparently scuttled by scrutiny from federal officials, the iconic property remains in the portfolio of owner Blackstone Group LP...