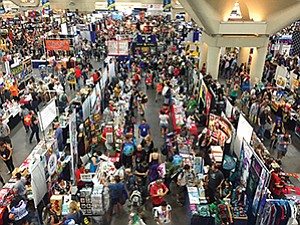 As in past years, about 130,000 attended the 2016 Comic-Con International, including content producers, global media outlets and costumed fans.

San Diego — These days, the ripple benefits of Comic-Con International, the largest convention held annually in San Diego, extend well beyond the exhibitors seeking to impress the 130,000 attendees, or the hoteliers selling thousands of rooms to those pop culture devotees every July...