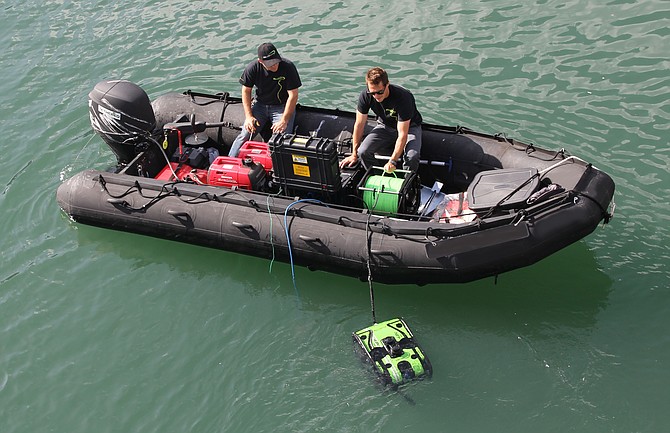 Technicians in a small boat put a SeaBotix unit through its paces. The robot swims at the end of a long tether - Photo courtesy of Teledyne SeaBotix

The deal is worth millions of dollars, Teledyne said in a Jan. 3 announcement. SeaBotix did not give a dollar amount for the contract.

The SeaBotix robot is about the size of a toaster oven and can operate at the end of a tether that can stretch for more than a mile.

The vLBV 300 systems will be fitted with a variety of off-the-shelf equipment, including a tracked crawler attachment skid and imaging sonar.

The Defense Department inked the contract with a SeaBotix distributor, Atlantic Diving Supply.

Explosive ordnance disposal mobile units have used Teledyne SeaBotix robots for several years. The new order will upgrade those units around the globe.

“The systems perform a variety of critical functions for the military but also serve to keep the men and women of our military out of harm’s way,” Teledyne SeaBotix President William Kikendall said in a prepared statement.

“Diving is a dangerous activity. Robots are replaceable,” said an oceanographic equipment supplier in a Business Journal interview in 2007.