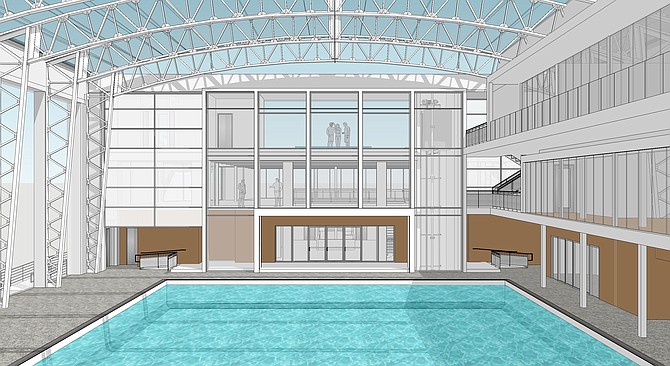 San Diego-based Pacifica Enterprises has broken ground on a long-anticipated, $11 million renovation and restoration of the historic Plunge swimming pool at Belmont Park in Mission Beach.

A statement from the developer, which operates Belmont Park under a lease agreement with the city of San Diego, said the facility is scheduled to reopen in 2019, after being closed for the past several months. The Plunge was among Belmont Park’s original attractions when the park opened in 1925 but has fallen into disrepair over the years.

The renovation was kicked off with a recent public ceremony at the Mission Beach site. Pacifica Enterprises will complete a restoration of the historic swimming pool and the building that surrounds it. There will also be a new state-of-the-art fitness center operated by Fit Athletic Club.

Developers said the new building will have a glass retractable roof system, geared to promoting natural air circulation, and will incorporate some of the park’s current Spanish Renaissance architectural features.

The project’s general contractor is Lusardi Construction Co. of San Marcos, which began demolition of the old Plunge building in mid-January. The designer of the Fit Athletic Club is San Diego-based Jules Wilson Interior Design, which has also worked on Fit locations that opened previously in East Village and Solana Beach, according to a statement from the design firm.

Pacifica Enterprises acquired the lease to Belmont Park in 2012. The renovation of the Plunge is being done through a public-private partnership in which the developer will advance $5.2 million for the renovation of the city-owned property. The company will recoup its investment through rent credits over the next seven to 10 years.