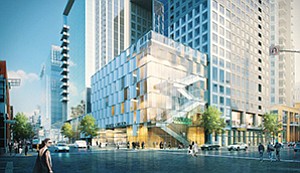 A City Council decision on the proposed downtown 7th & Market mixed-use development is on hold while the city decides on a new operating agreement with Civic San Diego. Rendering courtesy of Cisterra Development

San Diego — After more than a year of discussions, San Diego officials are nearing agreement on standards expected to boost oversight and raise standards for the approval of projects currently overseen by Civic San Diego, the nonprofit that has the final say on many development projects downtown and elsewhere in the city...