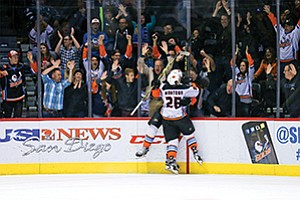 The San Diego Gulls closed their inaugural regular season with the second-best attendance in the American Hockey League, with more than 8,600 fans per game. Photo courtesy of San Diego Gulls Hockey Club

San Diego — Even as Chargers fans gear up for an election battle to keep the football team in San Diego and the Padres struggle to come back from record-setting early-season futility, there is a bright spot in professional San Diego sports:

The San Diego Gulls, the minor league affiliate of the Anaheim Ducks, ended its inaugural regular season this month with some of the best revenue and attendance in its league...