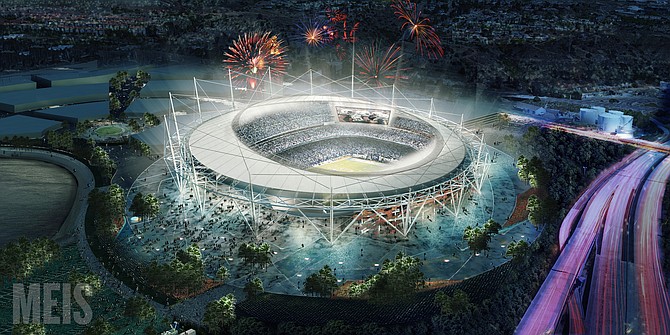 Advisory group chairman Adam Day said at a May 18 news conference that the panel has identified more than $1.4 billion in potential revenue streams that could be used in various combinations to build a new multi-use stadium in Mission Valley without increasing taxes.

The stadium would be built on 60 acres of city-owned land, which is part of the current 166-acre site that houses Qualcomm Stadium. The bulk of costs could be covered by more than a dozen potential funding sources identified by the task force.

Those include a $300 million contribution from the Chargers, $200 million from the National Football League, and $173 million in bondable construction capital from the team’s rent. The city and county of San Diego would each contribute $121 million.

Potential revenue streams also include $225 million from the sale to developers of 75 acres at the Mission Valley site, and more than $100 million from fans who would contribute through the purchase of personal seat licenses, along with ticket and parking surcharges.

The surcharges could help the city cover its part of the costs, and the Chargers could get revenue for their part of the tab through avenues such as naming rights, Day said. Further revenue could come through renegotiated rents with other stadium users, including San Diego State University and college bowl game organizers.

Day said the plan as presented is fair for the Chargers and other future tenants in the stadium, and also fair for taxpayers. He said the stadium could be shovel-ready by 2017, and stadium construction would not be dependent on future ballot issues or the fate of any commercial development adjacent to the stadium.

“Our plan is the first of its kind, and it should jump-start negotiations between the Chargers, the City and the County,” Day said. “There now is a fair and workable path to a new stadium in San Diego.”

The task force’s proposal comes as the Chargers are seriously considering a plan to team with the Oakland Raiders to build a new stadium in the Los Angeles suburb of Carson. Chargers officials are now studying the advisory group’s proposals.

“We are grateful to the CSAG members who volunteered their time, and we will now ask our stadium development team -- including our financing, legal and land use experts -- to thoroughly review the CSAG results,” said Chargers special counsel Mark Fabiani, in a statement.

“We are now ready for another first – beginning formal negotiations with the Chargers,” Faulconer said in a statement. “The County and the City of San Diego have, for the first time, assembled an experienced negotiating team that will review the CSAG report as it prepares for talks with the team.”