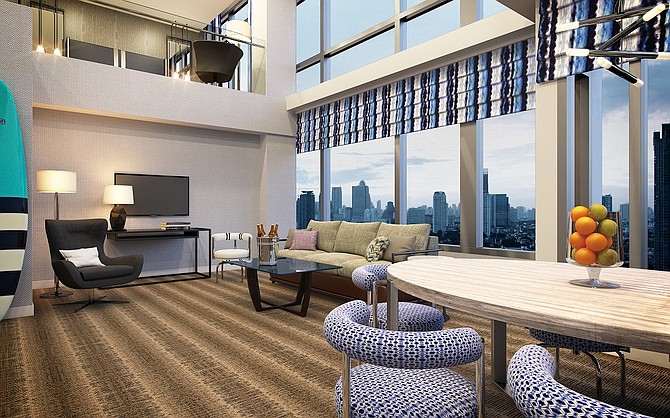 Kimpton Hotels & Restaurants has begun a $5 million renovation of downtown’s Hotel Palomar San Diego, with 50 of its rooms on five floors being reconfigured and rebranded under a concept called Skyline Collection.

Operators said a two-month redesign project kicked off in early February, under the direction of new General Manager Jim Hollister, and is expected to be completed in April. On floors 16 through 20, the redesigned Skyline Collection rooms will include 30 guestrooms, 12 junior suites, six suites and two penthouses, with “surf-inspired modern design” and enhanced city views.

San Francisco-based Kimpton purchased the 183-room Hotel Palomar, at 1047 Fifth Ave., out of bankruptcy for $49 million in 2011 and has since invested in extensive changes. The property opened in 2008 and was known as Se San Diego under its previous owner.

In the local market, Kimpton manages Hotel Solamar in the Gaslamp Quarter and Hotel La Jolla. The privately held company oversees a total of 64 boutique hotels in 30 cities nationwide.