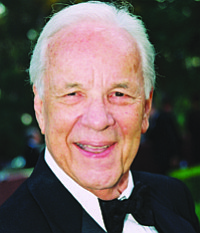 The scholarships to be created by the gift will aid an estimated 150 students a year, including students who are veterans and those involved in entrepreneurship, the SDSU honors program, and the creative and performing arts, among others.

Prebys, who has supported many other organizations around San Diego, said this is his first time donating to a fund for student scholarships.

“The idea of scholarships for students intrigues me because I know how difficult it is going to college right now,” Prebys told the SDSU NewsCenter.