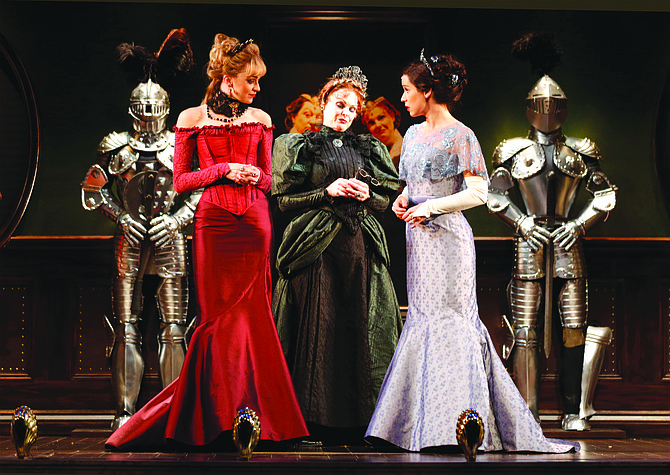 Former Old Globe Co-Artistic Director Darko Tresnjak returns to direct A Gentleman’s Guide to Love and Murder; a new musical premiering at The Old Globe. When Monty Navarro, the black sheep of the D’Ysquith family, finds out he is ninth in line to inherit a dukedom, he decides to eliminate the other eight heirs standing in his way – all played by Tony Award winner Jefferson Mays (I Am My Own Wife).

The Tony Award-winning Old Globe is one of the country’s leading professional regional theaters and has stood as San Diego’s flagship arts institution for more than 75 years. Under the leadership of Artistic Director Barry Edelstein and Managing Director Michael G. Murphy, The Old Globe produces a year-round season of 15 productions of classic, contemporary and new works on its three Balboa Park stages: the Donald and Darlene Shiley Stage in the 600-seat Old Globe Theatre and the 250-seat Sheryl and Harvey White Theatre, both part of The Old Globe’s Conrad Prebys Theatre Center, and the 605-seat outdoor Lowell Davies Festival Theatre, home of its internationally renowned Shakespeare Festival. More than 250,000 people attend Globe productions annually and participate in the theater’s education and community programs. Numerous world premieres such as The Full Monty, Dirty Rotten Scoundrels, A Catered Affair and the annual holiday musical, Dr. Seuss’ How the Grinch Stole Christmas!, have been developed at The Old Globe and have gone on to enjoy highly successful runs on Broadway and at regional theaters across the country.

Set in England’s elegant Edwardian era, this witty music hall comedy was proclaimed “gorgeous, funny and melodious” by the Hartford Courant. Named one of the top 10 “Hottest Tickets of the Year” by The New York Times, A Gentleman’s Guide to Love and Murder explores how low we’ll go to make it to the top.

“I know that this beguiling and very funny new musical will delight Globe audiences,” said Old Globe Artistic Director Barry Edelstein. “The remarkable team of Robert L. Freedman and Steven Lutvak has crafted a show that is sharp, surprising and entertaining, and at its helm is the great Darko Tresnjak, an old friend I’m delighted to welcome back to the Globe. Tresnjak’s partners in crime are the stellar Ken Barnett and Jefferson Mays, two of the most exciting stage actors in America, whose deft and hilarious performances are real tours de force.”

Ken Barnett stars as the charming and vengeful Monty Navarro. He has appeared on Broadway in Wonderful Town directed by Kathleen Marshall and The Green Bird directed by Julie Taymor, and his Off Broadway credits include the world premiere of February House, Manon/Sandra, Debbie Does Dallas, The Whore of Sheridan Square and La Ronde, for which he received the Best Actor Award at the New York International Fringe Festival.

I Am My Own Wife earned him the 2004 Tony Award for Best Lead Actor in a Play as well as Lucille Lortel, Drama Desk, Outer Critics Circle, Obie, Helen Hayes and Drama League Awards. His other Broadway credits include Journey’s End, Pygmalion and last season’s Gore Vidal’s The Best Man, and his Off Broadway credits include the American premiere of Blood and Gifts, Measure for Measure, Quills and Orestes.The cast of A Gentleman’s Guide to Love and Murder also features Chilina Kennedy (Phoebe D’Ysquith), Lisa O’Hare (Sibella Hallward) and Heather Ayers, Rachel Izen, Kevin Ligon, Kendal Sparks, Price Waldman and Catherine Walker (Ensemble).