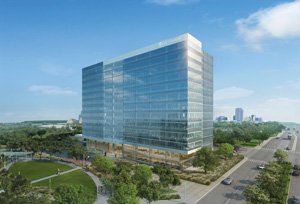 LPL Financial has committed to occupy all 13 floors of a University Towne Center high rise now under construction.

Development and investment firm Hines has begun construction on something that’s recently become a rarity in San Diego and most major metro markets: a new high-rise office building.

The Houston-based company broke ground in late April on what will be the second tower in its La Jolla Commons development at University Towne Center. The financial services firm LPL Financial has signed a long-term lease to occupy the entire 13-story, 415,000-square-foot building after its completion in mid-2014.

LPL, which employed more than 1,600 people locally as of mid-2011, will be relocating workers from several offices it currently occupies throughout San Diego, primarily in UTC. An LPL spokesman said company leaders would not be available before press time to discuss plans for the new site.

“We had a situation where LPL was looking for a place to put all of its operations, and we were able to come to arrangements that worked for everybody,” said Hines Managing Director Paul Twardowski, who is based at the firm’s San Diego office.

The privately held Hines is building the tower in a joint venture with institutional investors advised by J. P. Morgan Asset Management, and project cost estimates have not been disclosed.

Like other local experts, Twardowski said the new tower’s arrival is not a sign that developers are about to embark on a high-rise building binge. Rather, it reflects a specific limitation of the current San Diego office supply: the shortage of remaining large spaces available for the biggest local companies wishing to house all or most of their workers in one location.

“There’s really not a large number of big blocks left in terms of office space,” Twardowski said. “There isn’t even much in terms of full-floor availabilities right now.”

Experts said the UTC development could signal an uptick in future build-to-suit construction projects, geared to the space needs of large firms seeking spots in the high-demand office submarkets. Other tenants in the market, especially firms seeking 20,000 square feet or less, are still finding plenty of available options, even as overall vacancies have slowly declined with the improving economy.

That reality and other economic factors likely will keep tower building booms well in the future. “It always depends on the strength of tenant demand, and that demand right now is still spotty,” Magnaghi said. “It’s certainly better than last year, but I would say it’s still a tenant’s market.”

The brokerage firm Cushman & Wakefield put San Diego County’s direct office vacancy rate at 14.1 percent at the end of the first quarter, down from 15.3 percent in the same period of 2011. The overall vacancy rate, with available sublease space included, went from 16.8 percent a year ago to 15.8 percent in the latest quarter.

“I think you’ll be seeing some of these projects starting to move through the planning pipeline by the end of the year,” he said.

The LPL decision to take the full Hines tower could also indicate that certain sectors, such as financial services, are preparing to ride future growth in the overall economy. “I think it’s an indicator that financial services is bouncing back, to the extent that a company would be able to commit to this kind of space usage,” Broderick said.

The current tower at La Jolla Commons — with tenants including US Bank, KPMG and law firm Paul Hastings LLP — was completed in 2008, and Twardowski said Hines in coming years will be looking to add a third large building at the development, likely focused on hotel and residential elements to complement neighboring office buildings.

Hines was a primary construction manager during development of Petco Park and has an international portfolio of buildings it has developed and acquired over the years, including downtown San Diego’s Golden Eagle Plaza and five other office properties in San Diego County.

It currently owns a total of 4 million square feet of real estate in San Diego and Orange counties, and Twardowski said it will next be scouting for industrial and multifamily opportunities in both regions.

“San Diego is a priority market for the company,” he said.