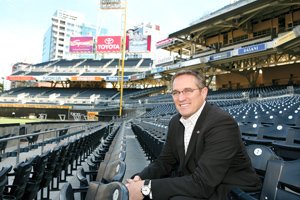 Investors: Moorad and a dozen other partners, including former NFL quarterback Troy Aikman, who are purchasing the team from John Moores.

Year founded: 1936, as a member of the Pacific Coast League; joined the National League in 1969.

Luring fans to baseball games, or any sporting event in San Diego, has always been a challenge, but the San Diego Padres may have an even tougher task this season...